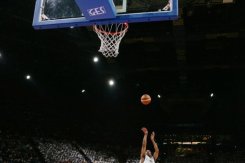 "The investigation is underway," a spokesman from the prosecutors' office in Uijeongbu city near Seoul, told AFP. He declined to elaborate.

The coach, whose name was not revealed, allegedly received some 30 million won ($27,500) from a gambler about two years ago and rigged games by substituting key players, Yonhap news agency and other media outlets said.

Professional sports in South Korea have been rocked by a series of scandals in recent years, touching football, volleyball, baseball and even motorboat racing.

In 2011 prosecutors charged 57 people -- 46 current and former players and 11 criminal gang members and bookmakers -- with fixing the results of 15 matches in the professional football K-League.

The scandal led to two players and a former coach taking their own lives and prompted the world governing body FIFA to slap sanctions on dozens of South Korean players.

In 2012 at least 20 people including baseball and volleyball players were given prison sentences, suspended jail terms or fines for match-fixing.

The country already has tough laws restricting gambling and the government has recently strengthened a crackdown on illegal Internet betting sites.

Perth in grave doubt for Ashes finale over Covid rules