Former cycling champion Laurent Jalabert suffered serious injuries on Monday when he was struck by a car while on his bike in Montauban, according to emergency services at the scene and a source close to the investigation. 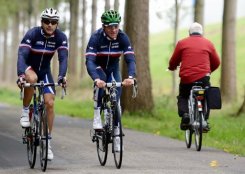 France's Thomas Voeckler (L) and head coach of team France Laurent Jalabert on September 18, 2012 in Valkenburg,The Netherlands. Former cycling champion Jalabert suffered serious injuries on Monday when he was struck by a car while on his bike in Montauban, France.

Jalabert, the world time-trial champion in 1997, suffered a broken left leg and an injured shoulder.

The collision happened not far from Jalabert's home.

It is believed that Jalabert, who is the coach of the French cycling team, was struck by a car travelling in the opposite direction.

The 44-year-old was unconscious when discovered by emergency services and has been taken to a hospital in Montauban.

"His condition is not life-threatening, but he has suffered several fractures and requires surgery," the hospital said in a statement seen by AFP.