Singapore health officials said Friday it was "very unlikely" that professional golfer Natalie Gulbis had contracted malaria while in the city-state. 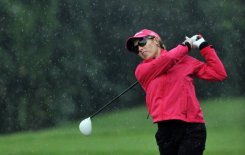 Natalie Gulbis of the US hits a shot during the second round of the Swinging Skirts 2012 World Ladies Masters at the Miramar Golf and Country Club in northern Taoyuan county on December 8, 2012. Singapore health officials said it was "very unlikely" that professional golfer Natalie Gulbis had contracted malaria while in the city-state.

The 30-year-old American withdrew from the Founders Cup tournament in Phoenix, Arizona this week after being diagnosed with the potentially deadly mosquito-borne disease.

She had also pulled out of the HSBC Women's Champions in Singapore two weeks ago.

The LPGA Tour has said Gulbis "originally became ill" in Singapore but stopped short of saying where it believed she had acquired malaria.

Gulbis had competed in a tournament in Thailand before flying to Singapore, which has been classified as malaria-free by the World Health Organization since the early 1980s but is still plagued by tropical diseases like dengue fever.

The Singapore health ministry told AFP that "while we do not have details of her medical condition, we note that the incubation period for malaria ranges from one to four weeks".

"As such, it is very unlikely for an individual to have acquired malaria in Singapore if he or she became ill in less than seven days from the time of arrival," a ministry spokeswoman said.

The LPGA said Gulbis was being treated at home and "expected to be at full strength in three weeks".

A healthcare company at the Phoenix tournament will test players and caddies who wish to be checked for malaria, it added.

Fears of a malaria outbreak swirled in early March after top golf coach Butch Harmon tweeted that Gulbis and South Korea's Pak Se Ri, who also withdrew from the Singapore event, were in hospital.

Pak was cleared of malaria, the LPGA said in early March as Gulbis was being tested in Singapore.