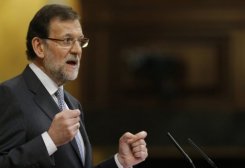 After an introduction from Spanish prime minister Mariano Rajoy, the committee had the opportunity to visit four of the proposed sites, including Real Madrid's Santiago Bernabeu stadium.

Botella said the committee members were delighted to be met by Spanish captain Iker Casillas and presented with their own memento from the club.

"The day has gone very well. There was nothing untoward and the questions we received were the ones we expected," she told a press conference.

"In the Bernabeu the members were very happy to be presented with a shirt with their name on the back and meet players and directors, as they did in all of the four venues we visited."

Botella also reiterated her belief that the 1.5bn euros ($1.961bn, pound sterling1.297bn) left to invest in infrastructure was a perfectly manageable figure over the seven year period until the games would take place and that the games would be an economic boost to Madrid and Spain as a whole.

President of the Spanish Olympic Committee, Alejandro Blanco, meanwhile insisted the bid was different to the ones that failed in their attempts to host the 2012 and 2016 games.

Blanco said in particular the use of two of the other venues visited by the commission on Monday - Retiro Park and Las Ventas bull ring which would host the beach volleyball and basketball respectively - was based on the success of famous public landmarks such as Horse Guards Parade at the London Olympics last year.

However, Blanco said the key message of the bid remained that the games would be good for the younger Spanish generation.

"The concept of the games is what is the most important," he said.

"The idea that this is a games for the young and that is the message we will try to convey for the next four days."

Spanish sports minister Miguel Cardenas also touched on the delicate issue of doping and the new law proposed by the Spanish government to bring its law into line with the World Anti-Doping Agency (WADA) code.

Cardenas referred specifically to IOC president Jacques Rogge's praise of the new law in an interview with Spanish newspaper El Mundo on Sunday and said it would go before parliament before a final decision is made on who will host the games on September 7.

Earlier the bid's Chief Executive Victor Sanchez claimed the bid had been careful to stay clear of spending money on underused facilities and said the use of temporary venues would be used where the construction of a permanent one could not be.

"We have steered clear of white elephants," he said.

"Projects that have no real use for citizens after the Games have finished. That is why we have given priority to existing infrastructures and then to other infrastructures that the city has a direct need for.

"Finally, where a future use cannot be guaranteed, we have opted for temporary solutions."

"Only three such temporary solutions will be used, while a mere four permanent facilities remain to be built.

"The result is lower costs, reduced environmental impact and less disruption to the everyday lives of the people of Madrid, all with government backing at central, regional and municipal level."

The committee's inspection of the proposed venues continues on Tuesday including visits of the Olympic village and stadium.