Jamaican sprint star Usain Bolt, testing himself again over 400 meters, clocked 46.44secs in a runner-up finish to Nicholas Maithland at the University of West Indies Invitational. 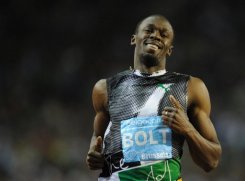 Jamaica's Usain Bolt celebrates after winning the men's 100m at the Diamond League athletics meeting on September 7, 2012, in Brussels. Bolt, testing himself again over 400 meters, clocked 46.44secs Saturday in a runner-up finish to Nicholas Maithland at the University of West Indies Invitational.

Bolt, who also raced the 400m at the low-key Camperdown Classic and competed in the 4x400m relay at the Gibson Relays -- both in February -- started out well on Saturday.

He led into the straight, but faded as Maithland took charge in the closing stages to win in 45.79.

"This will be my second time in Brazil, but this time to compete and I hope all the fans come out and support me," he said.

Blake, who is the reigning 100m world champion, said the run, his best over the distance, showed he is where he wants to be in the early stage of the season.

"I feel good to run my personal best over 400," Blake said. "If the wind wasn't that strong, I would have gotten a faster time. But I still have to give good thanks.

"I'm running some good times in the 400, so I'm right where I'm supposed be," said Blake, whose next outings are in Doha and Shanghai.

"I'm just going to go back to training and prepare for those meets," he said.

Ratchanok falls to Korea's An in QF

Bilbao gatecrash Super Cup, vulnerable Bayern - what to watch in Europe this weekend