China's Peng Shuai showed little sign of a recent shoulder injury at the WTA Portugal Open on Tuesday as she knocked out French top seed Marion Bartoli in the first round 6-0, 1-6, 6-4. 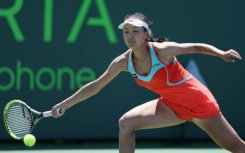 Peng Shuai of China plays a forehand on March 21, 2013 in Key Biscayne, Florida. Peng used a minimal amount of clay court preparation on Tuesday to knock French top seed Marion Bartoli out in the first round of the Portugal Open 6-0, 1-6, 6-4.

Peng, a 2010 semi-finalist in her only previous appearance at the event, had just limited time to train after returning to her homeland to treat a shoulder injury following a Miami second-round loss more than a month ago.

After receiving treatment in her hometown of Tianjin, she travelled on to Germany where she made light of her meagre clay preparation by stunning Bartoli, the world number 14 who is on a poor run having lost her last four WTA matches dating back to mid-March.

"I"m very happy to win in such windy conditions," said the 27-year-old Peng, ranked 34th in the world.

"The clay was blowing around a lot, making it even more difficult."

Peng won in an hour and three-quarters as the erratic Bartoli produced eight double-faults and was broken five times.

The quirky French player has reunited with her doctor father Walter as coach after several months of unsuccessful trials with other potential mentors including former Wimbledon champion Jana Novotna, but is still looking for a win.

"The first match on clay is always tough for me," said Bartoli. "I had a lot of trouble finding my game and my feet on the court.

"She was playing extremely well. I just tried my hardest and was able to play some good shots in the second set. I felt like the third was really close.

"We both started to play quite well, but at 3-3 when I had 40-15 she hit quite a lucky return and that really hurt me.

"It was a very difficult draw, but I think it is better for me to have those kind of matches early in the clay court season and try to improve for the big events coming up."

Wimbledon quarter-finalist Tamira Paszek has gone winless for three months since the Australian Open, with the 31st-ranked Austrian losing her seventh straight match as she went down 6-1, 6-3 to Romanian Monica Niculescu.

In the men's draw, France's fifth-seeded Julien Benneteau like compatriot Bartoli failed to justify his seeding as he lost to Spanish qualifier Pablo Carreno-Busta 6-3, 6-4.

Spaniard Albert Ramos will line up in the second round against number two seed Stanislas Wawrinka thanks to a defeat of Argentine Carlos Berlocq 7-6 (7/4), 2-6, 6-3.

Spain's David Ferrer is top seed but will not start his campaign until the second round as the top four seeds receive byes.