Cheng Ji, the first Chinese rider to participate in the Giro d'Italia, has pulled out of the race after falling ill with a fever during the night, his Argos team announced on Thursday 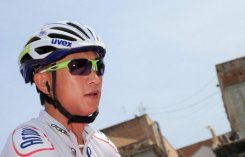 Argos-Shimano Chinese rider Cheng Ji gets ready on Piazza Plebiscito for the start the first stage of the 96th Giro d'Italia in Naples on May 4, 2013. Ji, the first Chinese rider to participate in the Giro d'Italia, has pulled out of the race after falling ill with a fever during the night.

Ji, 25, did not start the 169 km sixth stage from Mola di Bari to Margherita di Savoia in southern Italy.

"When a rider has a fever, it is dangerous to let him start, even if he might be better tomorrow. He did not eat this morning and felt very weak," said Argos's team doctor Edwin Achterberg.

"We don't want to take any risks. His health comes first."

Ji, who became the first Chinese rider to complete the three-week Tour of Spain last year, said: "I felt really good during the first few days, and especially after John Degenkolb's win yesterday.

"I just got sick during the night, and it is really hard to leave this beautiful race already.

"It was my goal to support John to a stage win and to finish this race. So I am very disappointed that I can't reach the second part of my goal."