Top seed Novak Djokovic played without ankle pain Thursday in a routine 6-1, 6-4 defeat of Alexandr Dolgopolov for a quarter-final place at the Rome Masters, and then spared a thought for the injury plight of rival Andy Murray. 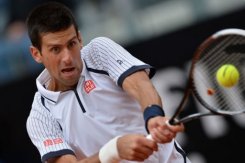 Serbia's Novak Djokovic returns a ball to Ukraine's Alexandr Dolgopolov (not in picture) during their Rome Masters match on May 16, 2013. Djokovic won 6-1, 6-4 to reach the quarter-finals.

Djokovic dispatched Dolgopolov in an hour, with five aces and 13 winners in a contest which began 45 minutes late due to morning rain.

The two-time Rome champion will play Czech Tomas Berdych, a winner over South Africa's Kevin Anderson 7-5, 6-2, in the last eight.

Djokovic said that he had almost forgotten about his ankle injury since winning the title in Monte Carlo over Rafael Nadal last month while carrying the problem.

"I've been pain-free for a week but I'm still very cautious in my warm-up and recovery. I want to do the best for it as possible. I don't think it will bother me any more and I don't think about it when I'm on the court."

That was not the case for Murray, though.

The Scot is on the verge of withdrawing from the French Open starting a week from Sunday after quitting his opening match in Rome with the chronic back pain which has bothered him for almost 18 months.

Djokovic, a few seasons ago known as injury-prone, is now an iron man who stands atop the world rankings. His most recent niggle, the ankle problem from early April, is now a thing of the past, according to the 25-year-old Serb.

Djokovic said that he is sorry to hear of the plight of Murray.

"That is not the kind of news you want on your birthday," he said of Murray, one week his elder, who turned 26 on Wednesday. "It would be a pity if he doesn't play.

"He's one of the top players, it is a loss for any tournament for him to be missing. I don't know the level of his injury, he is the best one to know how he feels.

"But perhaps he will have time to recover, we will know more in the next few days. There is the most value in the Grand Slams, that's where you want to make your mark and play your best."

Italian seventh seed Sara Errani, runner-up in Paris a year ago to Maria Sharapova, advanced to the quarter-finals as Russian Maria Kirilenko quit trailing 6-3, 2-0 with a knee injury.

Neymar swept up in Brazil vote battle after video for Bolsonaro