Monaco's billionaire Russian owner Dmitry Rybolovlev announced on Friday the signature of Colombia forward Radamel Falcao from Atletico Madrid in a deal believed to be worth around 60 million euros ($77 million). 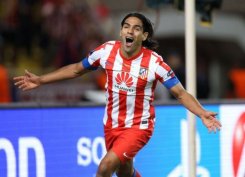 Monaco's billionaire Russian owner Dmitry Rybolovlev announced on Friday the signature of Colombia forward Radamel Falcao, pictured on August 31, 2013, from Atletico Madrid in a deal believed to be worth around 60 million euros ($77 million).

"I would like to officially announce that Falcao has signed his contract," Rybolovlev said through a French interpreter at an event celebrating Monaco's promotion to the French top flight next season with Prince Albert of Monaco and coach Claudio Ranieri also present.

Rybolovlev didn't give any details about the size of the transfer, although Monaco said on their website the player had signed for five years.

"I am very happy at his arrival," beamed Ranieri, who was Chelsea manager when they lost to Monaco in the 2004 Champions League semi-finals.

"He is a very important player for us, a great player and a great goal scorer.

"We want to build a very good team around him. He plays for the team but is also very efficient around goal. He is very impressive," continued the Italian.

"When I arrived at this club, I knew what the project was. Now everyone understands my decision," he added about taking over the coaching duties when they were playing second division football.

Although the fee has not been disclosed, media sources in France claim it is one of the largest, if not the largest in the country's history.

Monaco vice-president Jean-Louis Campora added: "We will not be giving any details on the content of the contract right now because we have an appeal in progress. We will give them in the future."

That appeal relates to a decision by the Professional Football League (LFP) that forces Ligue 1 teams to be based in France from 2014.

Falcao had a 60 million euro buy-out clause in his Atletico contract but some media sources claim the actual transfer fee is 45 million euros with the player due to pick up an annual salary of 14 million euros.

If those figures are accurate it would still make Falcao one of the most expensive buys in French football history.

The current biggest transfers were the 40-45 million euros Paris Saint-Germain paid AC Milan for Brazilian Thiago Silva and the 40 million euros they handed over to Sao Paulo for Lucas Moura.

Since being bought by the Qatar Investment Authority in 2011, PSG turned French club football on its head by bringing an until then unheard of and unrivalled spending potential into the country.

But Rybolovlev has already shown during the close season, since his side won promotion back to Ligue 1, that he is ready to compete with his chequebook.

"I want to thank all those who believed in our success," continued the owner.

"Managing a club as important as Monaco is a great honour. I have an incredible feeling and great pride but this is just the beginning."

However, Monaco's financial might is partly aided by the favourable tax laws in the Principality.

Whereas high income taxes in France prevent teams from paying the kind of salaries on offer in other major European leagues, such as England, Germany, Italy and Spain, Moanco is not subject to the same tax laws, giving the club an advantage over their domestic rivals.

But the LFP's decision would change everything for Monaco, and perhaps reduce their spending capacity.

The club has appealed against the decision and is awaiting arbitration.

Falcao arrived in the Principality on Monday night and undertook a medical on Tuesday while details of the deal were being finalised.

Since then the 27-year-old returned to Madrid, where he still has one last league match commitment to fulfil with Atletico.

According to some sources there is a get-out clause in a year's time if one of Europe's so called larger clubs, come in for Falcao.