Hidayat to retire after Indonesia Open

Former Olympic champion Taufik Hidayat confirmed on Friday that he would retire after next week's Indonesia Open Super Series tournament, but was tight-lipped about his plans for the future. 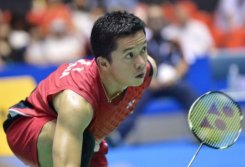 Taufik Hidayat of Indonesia follows his return shot during a match at the Japan Open badminton tournament in Tokyo on September 21, 2012. Hidayat confirmed on Friday that he would retire after next week's Indonesia Open Super Series tournament, but was tight-lipped about his plans for the future.

One of Indonesia's best-known sportsmen will bring the curtain down on a brilliant and sometimes controversial career during which he won the Olympic gold in Athens in 2004 and was also crowned world champion.

"I will remain focused on helping develop badminton, but the details are still secret," the 31-year-old told AFP when asked about his retirement plans.

He joked that details of a farewell party to be thrown for him at the end of the tournament were also a secret. "It's not a surprise anymore if I tell you now," he said.

The Indonesia Open, taking place in Jakarta from Monday to Sunday, will be the last chance spectators have to see Hidayat's legendary attack, which is particularly effective at the net, in a professional competition.

But the player from West Java province has also had his fair share of controversies.

He once separated from the Indonesian Badminton Association (PBSI) and based himself in Singapore, and on another occasion was ordered off the courts by security staff after a stand-off with officials at the Southeast Asian Games in Thailand.

Hidayat had been likely to face Lin Dan, often described as his arch-rival, in the first round of the Indonesia Open but organisers said Friday the Chinese shuttler had pulled out.

Lin will not take part in the Indonesia Open or the Singapore Open, which runs from June 18 to 23, according to PBSI official Basri Yusuf.

Lin confirmed his withdrawal to Chinese web firm Tencent's news and sports service, saying he was not in his best condition and wanted to focus on the World Championship.

"I had injuries at the Asian Championship, and my body hasn't recovered to its best form after the National Games this week," he said.

"I want to have some systematic training for a while before getting fully prepared for the World Championship," added Lin.

PBSI official Yusuf said it was unclear who Hidayat would now face in the first round, which will be played over Tuesday and Wednesday.

Others playing in this year's Indonesia Open include Malaysia's Lee Chong Wei and China's Chen Long.