After months of denial and an inexplicably huge surge in home runs, Japan's baseball chiefs have admitted they secretly switched the design of the ball to make the game more exciting. 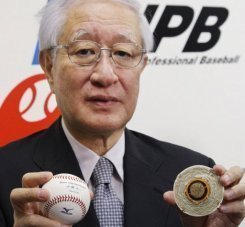 Nippon Professional Baseball (NPB) commissioner Ryozo Kato pictured on August 23, 2010 presenting the official ball for Japan's professional baseball official games in Sapporo. After months of denial and an inexplicably huge surge in home runs, Japan's baseball chiefs have admitted they secretly switched the design of the ball to make the game more exciting.

Players and fans had repeatedly quizzed Nippon Professional Baseball (NPB) bosses after seeing a 40 percent rise in the number of balls that were slugged out of the park so far this season.

In April the NPB said the specifications of their ball -- each of which bears the signature of its commissioner Ryozo Kato -- "have not been changed", a statement that was repeated several times since.

But on Tuesday the NPB came clean, saying it had asked manufacturer Mizuno to "adjust" the ball to give it greater bounce off the bat and had demanded the company keep quiet about the switch.

"Our understanding was that it would be a matter of fine-tuning," said NPB secretary general Kunio Shimoda.

"We thought it would cause confusion if we let it be known."

Commissioner Kato -- a former Japanese ambassador to Washington -- originally ordered a change in the make-up of the ball back in 2011, to bring it into line with the model used in the US.

The cork core of the ball was wrapped with a low-resilience rubber and its seams were widened. The organisation also made Mizuno the sole ball supplier, dropping its three rivals.

At the time, the organisation said the change would help Japanese players get accustomed to international standards.

"They pointed out that the game had become uninteresting. It has been a matter under discussion," Shimoda said.

When the rate of four-baggers rocketed this season -- a total of 512 home runs were hit in the first 341 games of the current March-October season -- questions began to be asked.

The Japan Professional Baseball Players Association wanted to know why an average of 1.50 home runs were being scored in 2013, against 1.05 in the previous two years.

Mizuno initially said the increase was due to foreign batters hitting so many home runs and was also related to the higher number of games being played in domed stadiums, where wind is not a factor, Kyodo News reported.

But union chairman Motohiro Shima said it was important the organisation was honest because it affected statistics.

"The numbers of home runs and .300 hitters (considered a high batting average) has apparently increased. The earned run average of pitchers has worsened," he said.

"It has affected players who signed deals on the results of performances in the years when the uniform ball was introduced."

Japanese media on Wednesday lashed out at Kato, accusing him of lying to the baseball-crazy nation.

"The commissioner's words and deeds, which lacked probity, raise questions over whether he should resign," the influential daily Asahi Shimbun said.

But Kato Wednesday denied he knew anything about the latest ball change, although he apologised for the incident.

"I didn't know anything about it at all," he told a hastily arranged news conference. "I have never intended to cover up the fact at all. Please allow me to apologise for causing such confusion as this."

Baseball is the most widely-followed professional sport in Japan, with games shown regularly on television.

Exports to the US Major Leagues are keenly followed, with stars such as Yu Darvish of the Texas Rangers becoming national heroes whose every game makes the news.