Whoever becomes the next president of the International Olympic Committee will face mounting pressure from combat sports organisations seeking inclusion into the Olympic Games. 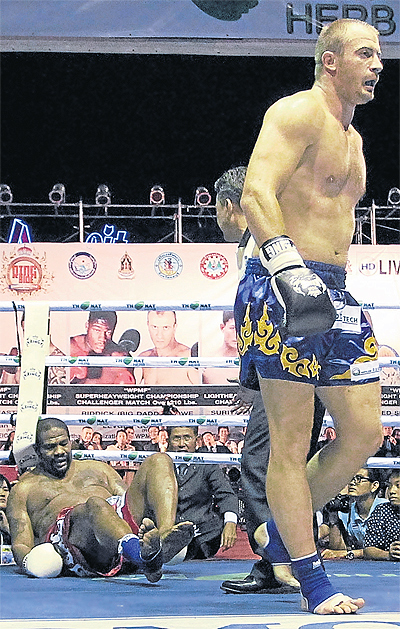 Riddick Bowe lies on the canvas after being knocked down by Levgen Golovin.

While Bach is considered the front-runner, the record number of candidates indicates there is no consensus and votes will be split.

All the six candidates have submitted their manifestos for the development of Olympic sports, and all have been lobbied by a core of combat sports organisations representing boxing, wrestling and martial arts.

As for wrestling, which was axed from the 2016 Olympics, the sport could make a quick return to the Games in 2020.

The IOC will later this year pick one of three sports _ wrestling, squash and baseball (and softball) _ to be included in the 2020 Olympics.

Wrestling has gone through a major overhaul after being dropped by the IOC in February.

Following a global outcry from wrestling organisations _ particularly those in the United States and Russia _ the IOC chose wrestling as a candidate to be included in the 2020 Games at a recent conference.

It came after wrestling bosses made a series of rule changes to make the sport more exciting and easier for spectators to understand.

Sports that failed to make the cut for consideration for inclusion in the 2020 Games include roller sports, sport climbing, squash, wakeboarding and the Chinese martial art of wushu.

All these sports will have to wait another four years to find out if they can make the 2024 Olympics.

Muay Thai wasn't nominated as a new Olympic sport, as it failed to pass the basic Olympic criteria along with mixed martial arts and kickboxing.

The man behind wrestling's move to make a return to the Olympics is Nenad Lalovic, acting president of the International Wrestling Federation.

Not surprisingly, Lalovic is not concerned about the plight of other sports and issued some tough advice for sports like Muay Thai that have Olympic aspirations.

"We don't think about their sport. We think about our sport, and we prepare ourselves without watching what's going on around us," he said.

Lalovic put wrestling through three months of reorganisation after the embarrassment of being dropped by the IOC in February.

The sport has made several changes to its rules to make it a spectator-friendly completion and easy to understand.

The changes include reducing wrestling matches to two three-minute sessions instead of three two-minute rounds. Scoring is streamlined so that it can be clearly understood round-by-round.

Lalovic said: "We have the strength to change. We made mistakes in the past, for sure. Now we are looking forward."

The US was instrumental in getting wrestling back on track by presenting impressive numbers of 300,000 high school students competing in the sport.

USA Wrestling executive director Rich Bender said wrestling was able to show the IOC that young wrestlers all over the world had the same goal to become an Olympic champion.

So what can Muay Thai learn from wrestling?

Firstly, there is still a long way to go for Muay Thai to get the nod to become an Olympic sport.

Wrestling made constitutional changes to include women in major decision making. That's a tough order for Muay Thai which has few _ if any _ female administrators and it is a tradition in Thailand that women are not allowed to enter the ring.

Another obstacle is that the IOC has made it clear that all new sports seeking Olympic admission must make the necessary changes to make their sport "more viewer-friendly".

By reducing the rounds, wrestling has become more attractive, and Muay Thai needs to address the first and last rounds for its five-round bout that are often extremely slow and irrelevant.

The two-minute rest periods between each round are too long and boring for many fans but appreciated by the gamblers.

To improve its chances of becoming an Olympic sport, Muay Thai has to revise the scoring system to reward the fighters who show effective attack as well as eliminating prolonged grappling.

Muay Thai bosses must have an understanding that all sports must evolve and that includes allowing more women to enter its upper echelons of administration and encouraging more women to compete in Muay Thai.

Buriram aim to get off to fast start in Korat