Hundreds of cheering fans gave Manchester United a stirring welcome yesterday as the English champions jetted into Thailand at the start of a flurry of Asian tours by top European clubs. 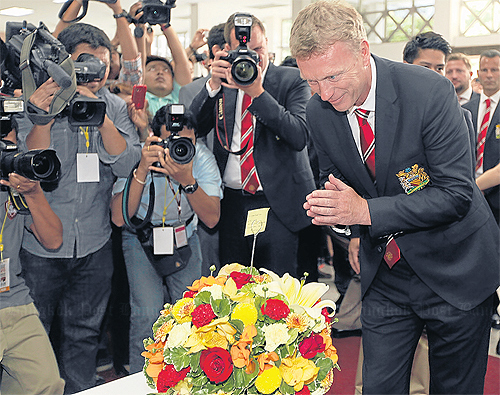 Spectators were out in force as the superstar squad, wearing suits with trainers, arrived by chartered jet at Bangkok's Don Mueang airport, where new manager David Moyes performed a traditional Thai greeting.

The players then boarded a huge bus emblazoned with the words ''United in Thailand'' and drove to their five-star downtown hotel, where they were welcomed by more fans holding banners and scarves.

Moyes and United great Ryan Giggs were also mobbed during a visit to Siriraj hospital, where they paid their respects and brought a big bunch of flowers for Their Majesties the King and the Queen.

England striker Wayne Rooney, at the centre of intense speculation about his future, walked with his head down and did not talk to media as he arrived with his teammates.

Moyes said: ''The players and myself are very excited and happy to be here in Thailand. For me, this is my second time in Bangkok but this time I am very excited because there are many supporters who greeted us with a warm welcome.''

The Red Devils will play a friendly against a Singha All-Star side at Rajamangala National Stadium tomorrow and Moyes said he would field his best players.

''It will be an exciting game although some of our players are absent,'' said Moyes who visited Thailand as Everton manager a few years ago.

He earlier told the club's website: ''It's crazy whenever we visit this part of the world.

''The reception we get in Asian countries is something else entirely. I've never seen fanatics like them.

''They come to airports at mad times in the morning to greet us, they hang around our hotels... it's great and makes us feel really welcome.''

United are the first to arrive in what will be a bumper Asian pre-season, with Chelsea due in Bangkok today and Barcelona, Manchester City and Liverpool among the other clubs heading to the region.

United captain Nemanja Vidic stay in Manchester because of back pain, but he may join the 19-man squad later on the tour of Australia, Japan and Hong Kong, according to the club website.

Robin van Persie, David De Gea and Shinji Kagawa will meet up with the team later but Javier Hernandez, rested after international duty, and injured trio Chris Smalling, Ashley Young and Nani are all missing.

Exciting new signing Wilfried Zaha is one prominent inclusion and Ferdinand said all players were keen to make an early impression on the new boss.

''I think it's natural that everybody here is trying to impress on this tour,'' he said.

''When you get a new manager you want to show him that you should be in the starting XI for that first day of the new season and that process has started already.''BANGKOK POST/AFP