A Vietnamese football fan dubbed the 'Running Man' chased Arsenal's team bus five miles through the streets of Hanoi before finally being invited on board to meet his heroes, the club's website said on Tuesday. 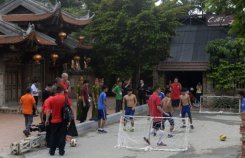 Arsenal football players Lukasz Fabianski (front C) and Laurent Koscielny (back C) play mini-football with local players from HAGL-Arsenal-JMG football academy in front of a pagoda in Hanoi on July 16, 2013.

Footage on the site shows players cheering and chanting "Sign him up, sign him up" as the young man wearing an Arsenal shirt and white trainers runs alongside the bus through the Vietnamese capital.

The video, which underlines the devotion for English Premier League clubs by Asian fans, then shows the fan appearing alongside the bus on the back of a motorbike -- to loud laughter from the players.

The man, who is not named, is eventually invited aboard to pose for photographs with the Arsenal squad and has his shirt signed by manager Arsene Wenger.

"It should be a message for all of you guys that if you really want to pursue your dreams, it can happen," said goalkeeper Wojciech Szczesny.

The footage illustrates the fervour for Premier League clubs by fans in Asia, where European football has a massive following.

Thousands of fans have turned out to give rock-star welcomes to Arsenal, Manchester United and Chelsea over the past week as they embark on pre-season tours of the region.