A succession of doping cases prompts call for action
Sports

A succession of doping cases prompts call for action

A doping scandal involving one of baseball's biggest stars is the latest in a series of cases in sport this year that have led to repeated calls for a tougher line on drug cheats. 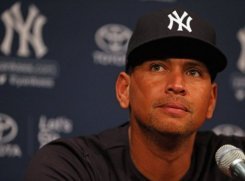 Alex Rodriguez of the New York Yankees speaks to the media before the Yankees take on the Chicago White Sox at US Cellular Field in Chicago, Illinois, on August 5, 2013. A doping scandal involving Rodriguez -- one of baseball's biggest stars -- is the latest in a series of cases in sport this year that have led to repeated calls for a tougher line on drug cheats.

New York Yankees slugger Alex Rodriguez was banned for 211 matches on Monday after Major League Baseball named him as one of 13 players to have used banned substances, including testosterone and human growth hormone.

"A-Rod" is still eligible to play as he is appealing the sanction but his alleged use of proscribed drugs comes after a succession of high-profile scandals -- and a steady drip of others that have made fewer headlines.

In January, US cyclist Lance Armstrong admitted that he cheated his way to a record seven Tour de France victories. He was banned for life and stripped of his wins, as further admissions of drug-taking in the peloton emerged.

Confessions came from former pro-cyclists including Erik Zabel -- a six-time green jersey winner for best sprinter on the Tour -- and the 1997 winner Jan Ullrich among others.

Last month, a French parliamentary commission into doping in sports published a report naming a number of top cyclists who had used the banned blood booster erythropoetin (EPO) in the 1998 Tour.

Cycling's long association with performance-enhancing drugs was laid bare in the long-awaited trial in Spain of medical doctor Eufemiano Fuentes, who was alleged to have been at the centre of a blood-doping operation.

On Monday, 31 Turkish athletes were banned for two years for doping offences, while Russia -- host of the world athletics championships that start on Saturday -- currently has some 40 athletes suspended because of drug use.

There have been positive tests, too, in tennis, where Serbia's Viktor Troicki, a former world number 12 and Davis Cup winner in 2010, was banned for 18 months for flouting doping rules.

The problem has extended to swimming, both rugby codes and Australian rules football, while Mahmood Al Zarooni, a trainer with the leading Godolphin stable, was banned for eight years for administering banned anabolic steroids.

Politicians in Germany are meanwhile looking into a report about the extent of a government-backed doping programme in West Germany from the 1950s in a number of sports, including football.

That doping exists in sport is nothing new. Early Olympians in ancient Greece used extracts from mushrooms and plant seeds to give them a competitive edge while chariot races are known to have mixed drugs in their horses' feed to make them go faster.

Gladiators in ancient Rome doped to increase aggression and make their combats more violent for a public baying for blood.

Nor is doping using medical drugs a recent phenomenon: the use of amphetamines dates back almost a century, while the Soviet Union began using male hormones and the United States anabolic steroids in the 1950s.

What has changed is the ability of anti-doping agencies to detect banned substances, through retrospective testing and the introduction of biological passports to detect anomalies.

That in part accounts for the apparent spate of cases, as does the rise in the use of supplements by athletes.

A number of countries are also seeking to criminalise doping, given increasing evidence that the provision of banned substances is linked to organised crime.

Nevertheless, with sanctions varying from sport to sport, there are mounting calls for a more standardised anti-doping code across all sports -- plus greater financing for in- and out-of-competition testing and scientific development to stay one step ahead of cheats.

World Anti-Doping Agency (WADA) director-general David Howman warned in May that the fight against doping could reach breaking point if more money was not found to finance testing.

"It really worries me because I think nobody knows how much we have to do now," Howman told AFP in an interview.

"At some stage, things will break and I do not want to be there when it happens because it would be very embarrassing for everyone."

Toughening rules and sanctions against dopers and even their entourage are likely to dominate the WADA conference in South Africa in November.

Candidates to replace Jacques Rogge as president of the International Olympic Committee have also made anti-doping a priority.

But as one candidate, Germany's Thomas Bach, said last week: "The fight against doping will never end.

"We will never reach the stage where there are no doping cases. There will always be people who try to give themselves an advantage in sporting competition."