Martino 'knows nothing' of Barca bid for Luiz
Sports

Martino 'knows nothing' of Barca bid for Luiz

Barcelona's new boss Gerard Martino on Wednesday said he was unaware of a bid for Chelsea and Brazil defender David Luiz, despite swirling rumours in the British press. 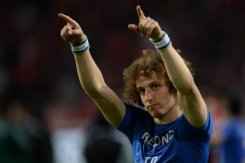 Chelsea's Brazilian defender David Luiz celebrates on May 15, 2013 at Amsterdam ArenA in Amsterdam. Barcelona's new boss Gerard Martino on Wednesday said he was unaware of a bid for Luiz, despite swirling rumours in the British press.

Speaking to reporters in Bangkok after watching his side canter to a 1-7 victory over a young Thai team, he said he had no knowledge of a rumoured bid worth around 35 million pounds (40 million euros, $54 million) for the towering defender, who can also play in a holding midfield role.

"We are here in Thailand, there is nothing we know about this," he said in a terse reply to a question on the potential for recruiting the Chelsea man.

Barcelona are known to be in the market for a ball playing central defender as back up to their ageing and increasingly injury-prone captain Carles Puyol.

Martino turned to the untested Franck Bagnack to partner stalwart Gerard Pique at the heart of the defence against Thailand on Wednesday.

The Cameroonian youngster, recommended to Barca by his compatriot and former Nou Camp hero Samuel Eto'o, gave away a penalty after getting caught flat-footed once in an otherwise solid if unremarkable 45 minutes against the Thais.

Martino may be keen on bringing in a more physical and experienced defender to add steal to a defence that was demolished by the strength and pace of Bayern Munich in last year's Champions League semi-final.

Luiz, who after a shaky start for the London club, has become a dominant -- if occasionally eccentric -- presence in the Chelsea defence, could fit the bill by bringing both power and a strong passing range to the pitch.