French hurdler Alice Decaux has been banned for six months for a doping offence, the head of the French Athletics Federation told AFP on Friday. 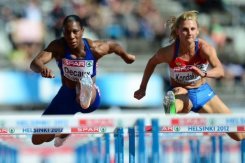 Alice Decaux (left) outpaces Russia's Yuliya Kondakova at the European Championships in Helsinki last June. The French hurdler has been banned for six months for a doping offence, the head of the French Athletics Federation told AFP on Friday.

Decaux tested positive for amphetamines in a test conducted at the European team event in the northern English city of Gateshead in June, according to Bernard Amsalem.

"She took a food supplement without taking care to have it tested by a doctor," Amsalem said.

"Unfortunately, the supplement contained a very small dose of a product from the family of amphetamines. And she produced a positive test."

Decaux, who finished second in the 100m hurdles at the French championships, was notified of the positive reading three weeks ago, and was omitted Wednesday from the French team to compete in the August 10-18 world championships in Moscow.

The hurdler becomes the latest statistic in the battle track and field is waging against drugs offenders.

The run-up to the world championships has been a rocky one, with the notable positive tests of top sprint rivals Tyson Gay and Asafa Powell, and Veronica Campbell-Brown, among many others.