Jason Dufner took an Internet insult and made it work for him just as he used a golf setback two years ago to help win a major title. 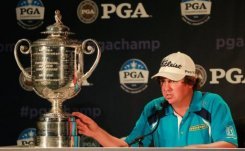 Jason Dufner of the US speaks after winning the 95th PGA Championship in New York on August 11, 2013. A picture taken of the golfer with a dead-eyed stare became an Internet hit, with fans copying his pose in what became known as 'Dufner-ing'

The 36-year-old American with the laid-back style and emotionless manner around the golf course won the 95th PGA Championship at Oak Hill, holding off Jim Furyk over the final holes to claim his first major title.

Dufner won two years after squandering a four-shot lead with four holes to play in the PGA Championship at Atlanta Athletic Club. After that defeat, he won his first US PGA titles last year at New Orleans and the Byron Nelson Championship.

But this year, Dufner became an Internet sensation after a picture of him seated in a relaxed position with an emotionless stare became a web site with the tagline "Dufner-ing."

But what had been used to poke fun at Dufner turned into a following, with fellow golfers and fans sending their own "Dufner-ing" images over the Internet.

"Got some notoriety for maybe something that was probably taken trying to hurt me a little bit and ran with it and it helped a lot," Dufner said.

"I got a lot of fans because of it and people identified me through it and that was good."

So Dufner wasn't totally surprised to see a trio of fans wearing "Duf's Dips" T-shirts come over from Canada to cheer him on to victory.

"They will have to pay their own expenses," Dufner said. "Pretty expensive to travel out here too. Great for them to come out and support me. Added a little bit to the excitement I guess. They were pretty jacked.'

Dufner vows that winning a coveted major title will not make him a different person, although it will ensure he plays at major golf tournaments for a while.

"It's definitely going to change my life, but I'm determined that it's not going to change me," Dufner said. "It's going to be a difficult task but I will take it step by step and day by day and go with it.

"I'm determined not to let it change me -- just maybe the surroundings I'm in."

Dufner has become something of an everyman favorite with fans, in part because he feels care-free enough to grab his wife Amanda's rear during a celebration kiss coming off the 18th green.

He fired a seven-under par 63 to match the low round in major-golf history in round two, and had a 12-foot birdie putt at the 18th hole for a 62. He left that 18 inches short and edged the par putt into the side of the cup.

On Saturday, Dufner had a two-footer for par at 18 that slid around the right side of the cup and fell in the back of the cup, a putt he admitted he thought he had missed.

On Sunday, the golf gods smiled upon him again at the 10th hole when a 12-inch putt just curled in the right edge and rolled down into the cup.

"There are definitely some nerves out there," Dufner said. "I know how I'm going to react to the pressure. I was just confident that I was going to putt my best foot forward and just really hang in there and try to win this thing at the end."

In doing so, Dufner ensured his name would be inscribed upon the Wanamaker Trophy alongside such icons of the sport as Jack Nicklaus, Tiger Woods, Phil Mickelson, Lee Trevino and Gary Player.

"I don't think you can claim to belong in that category until you have done it," Dufner said. "So now that I have done it, maybe I can sneak my foot in the back door and be back there with them."