Ukrainian world boxing champion and opposition leader Vitali Klitschko strongly hinted on Tuesday that he will challenge President Viktor Yanukovych in elections due in March 2015. 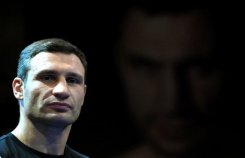 Klitschko told a gathering of Ukrainian diaspora representatives from more than 30 countries that the ex-Soviet republic's opposition most rally around a single presidential candidate soon.

"I am fully and responsibly considering whether to contest the Ukrainian presidential elections," Klitschko said on a visit to the western Ukrainian city of Lviv.

"The final decision will be taken after I hold consultations with (Ukrainian) society as a whole," Klitschko told a crowd of about 300.

"I am convinced that there should be a single candidate from the opposition."

The imposing heavyweight boxer has increasingly mixed boxing with politics and turned into one of the most serious opponents for Yanukovych, a Russian speaker who was criticised for pro-Moscow policies when he became president in 2010.

Yanukovych and his Regions Party have riled the nationalist and pro-Western opposition by bringing charges against ex-premier Yulia Tymoshenko that in 2011 saw the one time pro-democracy leader jailed for seven years.

Klitschko entered politics as a Tymoshenko ally whose campaign in 2012 parliamentary elections focused on an anti-corruption drive that played well enough with voters to win his UDAR (Punch) party a respectable third place.

The 42-year-old boxer -- who last week was forced to withdraw from his mandatory WBC title defence against Canada's Bermane Stiverne because of a hand injury -- said he now intends to travel the country and meet prospective voters.

"Our goal is a modern, democratic and prosperous Ukraine," he said.

Tymoshenko's Batkivshchyna party had earlier said it intended to nominate the fiery 2004 Orange Revolution co-leader for president despite her jailing.

Ukraine has three main opposition groups that besides UDAR and second-place Batkivshchyna also include the strongly nationalist Svoboda group -- now the fourth-largest party in parliament.

The three parties have so far agreed to work closely together during the election campaign but have yet to say whether they will nominate a single candidate.

Yanukovych's Region's Party still dominates parliament and has enough seats to outvote the opposition on most issues.

But Ukraine has been recently hit by an economic slump that saw industrial production slow and the government launch a vigorous defence of the country's flagging currency.

Fears of an imminent devaluation and continued frustration with perceived corruption in politics have helped the opposition gain the seeming upper hand in recent opinion polls.

A June study conducted by the Kiev International Institute of Sociology showed Klitschko edging ahead of Yanukovych among potential voters for the first time.

Klitschko was shown to have the support of 16 percent of potential voters against 14 percent for the president.

Nearly half of the respondents said they currently had no preference or were against all the potential candidates named by the pollster.

Brawl as Mayweather faces off with Youtube star Paul