Novak Djokovic, the world's top tennis player who grew up in Belgrade as NATO air strikes blasted the Serbian capital in 1999, hit out at US plans to take military action against Syria. 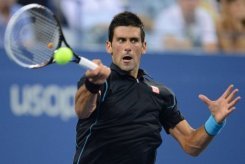 Serbia's Novak Djokovic during his US Open match against Joao Sousa in New York on September 1, 2013. Djokovic, who grew up in Belgrade as NATO air strikes blasted the city in 1999, has hit out at US plans to take military action against Syria.

Serb star Djokovic as well as former women's number one Ana Ivanovic both vividly recall sheltering from the attacks that were launched against the rule of Serb hardman leader Slobodan Milosevic.

Djokovic, 26, said Sunday that any attack against Syria would be ill-advised and counter-productive.

"Those particular times that me and my fellow countrymen and colleagues from Serbia have been through is a period of life that we don't wish anybody to experience. The war is the worst thing in life for humanity. Nobody really wins."

Djokovic was only 12 when NATO unleashed its firestorm, although his sporting talents allowed him to eventually quit Serbia for Germany to enroll in a tennis academy.

"It made us stronger, those two and a half months. We looked at it on the bright side. We were kids. We were only 12 years old. So we thought, OK, now we're not obliged to go to school, we can play more tennis," he said.

"So we spent the whole day basically every day for two months on the tennis courts with the planes flying over our heads. After a week or two of the bombings, we just kind of moved on with our lives.

"We did everything we could and what we wanted. We just let life decide for us."

World number one Djokovic, a six-time Grand Slam title winner, added: "It was not in our control. We were helpless basically. Luckily we all survived, and we take this kind of experience and this particular situation from our past as a great lesson in life."

Ivanovic, a former women's number one and past French Open champion, has often recalled the 78-day bombing campaign that forced her and her friends to play tennis in a derelict swimming pool.

"The pool was old, leaking and too expensive to heat, so they emptied it, put carpet inside and made two tennis courts," she said.

"It was impossible to play crosscourt. We had to keep playing down the lines."

During the crisis, flights in and out of Belgrade were suspended as she and her parents had to make a seven-hour car journey to Hungary in order to fly to international tournaments.