Dechawat determined to be taken seriously

Quirky antics conceal the Thai star's formidable will to succeed

Snooker star Dechawat Poomjaeng was popular at this year's world championship for two reasons _ he beat a top player and he entertained the crowds at the Crucible Theatre. 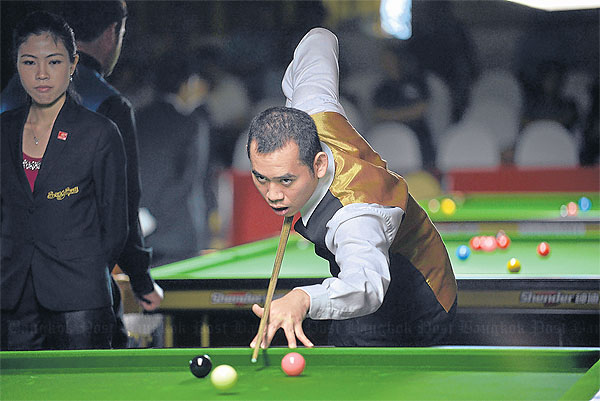 The Saraburi native stunned world No.5 Stephen Maguire in the first round but the biggest win of his career was probably overshadowed by his funny behaviour.

"I have been a funny person for my entire life," Dechawat told the Bangkok Post during last week's 6-red World Championship in Bangkok. "It is my nature. I play serious, but I also have something to give the crowd."

Thailand's most famous snooker player at the moment made the headlines this year after he defeated Maguire in his first ever match at the world championship.

Fidgeting, clapping, grinning widely, pretending to punch himself and pumping his fists in the air, Dechawat's world championship debut left the crowd cheering and laughing in their seats.

Before the match, he went to a wrong entrance and a wrong table at the Crucible. He endeared himself to snooker fans all over the globe with a manner officials and fans had never seen before in the sport.

He lost to Michael White in the next round and referee Michaela Tabb, who officiated both matches, called him 'a breath of fresh air to the game'.

Fans dubbed him 'Mr Poombastic', and several fans made YouTube videos highlighting his animated gestures in the mould of the former chart-topping single Boombastic by Jamaican rapper Shaggy.

"When they laugh or have a smile, it makes me happy," he said of the crowds at snooker events, some of whom can be seen waving Thailand's national flag in support.

Dechawat's behaviour is a far cry from the usual stoic, clam, and collected approaches fans are used to from most players.

"Normally, everyone in snooker plays seriously _ maybe a little bit too much," he said.

But the Thai said fans would probably benefit if other players also displayed a little more showmanship.

"It's OK to be serious. That's good," he said. "Everyone wants to win. But I think the players must also give something back to the crowd. They need to give them a smile, give them some fun and make them happy."

But don't mistake Dechawat's funny personality for a lack of dedication. At the age of 15, after being inspired by fellow Thai snooker player Ratchapol Pu-Ob-Orm (James Wattana), he decided to drop everything he was doing to pursue his new dream.

"I didn't study or do anything," he said. "I just played snooker. My mother said: 'Are you sure? Because if you choose one way to go and it doesn't work out, it will be too late to go back'. I told her: 'I have to try'."

He is based in Sheffield in a modest living arrangement with three other Thai players separated from his wife and daughter by nearly 10,000km.

The first time his daughter uttered the word 'daddy' to him, it was over a conversation on Skype.

His family is always on his mind. He saves almost all of his winnings, keeping as much money as he can for a better life for his family in the future.

Buying a new home is a big part of that plan. Down the road, he dreams of earning enough money to open a small business or a restaurant back home as well.

However, he said those dreams were still in the distance as he had only got 47,881 in official earnings.