France's most decorated athlete Marie-Jose Perec has confirmed that she has started training for the first time in a decade to compete in next month's New York marathon. 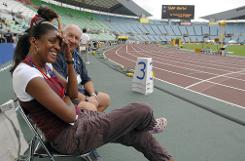 French former Olympic champion Marie-Jose Perec -- then now working as a consultant for a French sports daily -- is pictured joking with journalists on the side of the track of the World Championships in Osaka, Japan on August 23, 2007

The triple Olympic and two-time world champion admitted that she had "done absolutely nothing" since retiring and it had been hard to get back training for the race on November 3.

"I've never missed sport," she admitted. "I know that there are people who do it to feel good. In my life I've moved on to other things, I've a lovely family, other things in my head."

"When you've stopped for 2 or 3 years you become just like everyone else. So it's very hard to take up sport again like that. I'd have never thought of it. There are a lot of former sports stars who run the marathon: I saw (Amelie) Mauresmo, Stephane (Diagana)... I chatted with them, but I still don't understand why they have a second passion in the marathon. I don't have that."

Perec said she had only agreed to participate to help the people of Haiti, which suffered a devastating earthquake in 2010, as part of the Peace and Sport movement.

"I wanted to help Haitians. I grew up in Guadeloupe with a lot of Haitian neighbours," she explained, adding that her only ambition, apart from raising 50,000 dollars, would be to finish the race.

Nicknamed "The Gazelle" for her grace and speed, Perec pulled out of the 2000 Sydney Olympics at the last minute after she became embroiled in a scuffle with Australian cameramen trying to get film of her ahead of her highly anticipated showdown with Australian star Cathy Freeman.

She then endured a succession of injuries before finally retiring in 2004 at the age of 36.

"The body has a memory and sometimes I have the urge, suddenly to run fast," she said.