Kenya's fastest woman marathon runner Mary Keitany is confident of getting back to her winning rhythm when she resumes her racing career in the new year at the London marathon. 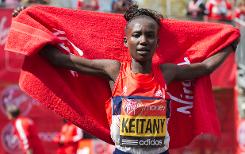 Mary Keitany of Kenya celebrates after crossing the finish line and winning the women's 2012 London Marathon on April 22, 2012

The two-time London marathon winner has not competed for the whole of this year, taking time off to have her second child who is now five months old.

"I have taken enough time to rest and be with my family. I hope to resume my training early in 2014 with the aim of competing in the London marathon in April," the 31-year-old Keitany told AFP from her hometown of Iten.

"I believe I will be back to my earlier level to mount a serious challenge in the women's marathon." she added.

Keitany's last race was a disappointing fourth-place finish in the London Olympics, despite her pedigree as the favourite to bring Kenya's first Olympic women's gold over the distance.

She dominated the London marathon in 2011 and 2012, clocking her best time of 2:18:50, the fourth fastest time in history and a Kenyan record.