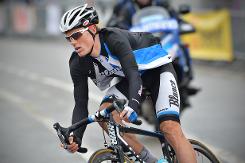 Spain's Luis Leon Sanchez of Blanco Pro Cycling Team rides during the fifth stage of the Belgium Tour cycling race, 175.6km from and to Banneux on May 26, 2013

Spanish police believed Sanchez was a client of the doctor in 2006 while riding for the Liberty Seguros team -- something the 29-year-old denies.

Sanchez has won several major titles, including the San Sebastian Classic in 2010 and 2012, the 2009 Paris-Nice, the Tour Down Under in 2005 and four stages of the Tour de France.

"His name crops up in too many files," a Belkin spokesman was quoted as saying.

An internal investigation that got under way at the start of the year had revealed nothing, but the "confidence between the team and Sanchez has been broken", he said.

In a bid to prevent Sanchez potentially discrediting Belkin, the team made a settlement with the rider, who leaves with two years to run on his contract.