Toby Flood has said there is a "burning desire" at Leicester to lift the European Cup again. 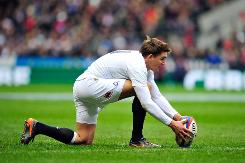 Toby Flood lines up the ball for a penalty kick at Twickenham Stadium in southwest London on March 10, 2013

It is 11 years since the English champions won the second of their back to back European titles by beating Munster in a final in Cardiff.

But, in what could be the final edition of the tournament should next season's proposed Anglo-French breakaway event go ahead, The Tigers start their continental campaign with a tricky Pool Five away match against Ulster in Belfast on Friday.

Leicester's previous two visits to Belfast, in 2003 and 2012, ended in 33-0 and 41-7 defeats respectively and Tigers captain Flood is well aware of the test that awaits his side.

"I didn't go to Belfast two seasons ago, but it was very disappointing. They played very well and we were poor. We can't afford for that to happen again.

"There is certainly a burning desire within the squad to reach the final again. It has been a frustrating 11 years waiting to bring the Heineken (European) Cup back to Welford Road after those back-to-back triumphs in 2001 and 2002.

"Last year we had to go to Toulon (the eventual champions) in the quarter-finals, but we all felt we could have come away with a result there. We are a club that is capable of winning on the road in the big games.

"Games in this tournament don't come much harder than having to face Ulster at Ravenhill on a Friday night and we know it is going to be a difficult start. It is as hard a place to go as any in Europe.

"But while we know what lies ahead of us, no team can afford to take Leicester lightly.

"We have a great pedigree in the Heineken Cup, and even though we haven't won it since 2002, we have been in two more finals since then."

The Bank of Thailand (BoT) slashed Thailand's economic growth forecast for 2021 on Wednesday for the second time this year to 1-2%.

Halep knocked out of Madrid Open, Thiem cruises through