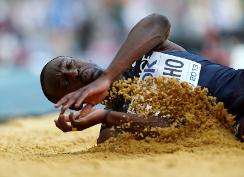 Teddy Tamgho competes in the men's triple jump final at the World Championships at the Luzhniki stadium in Moscow on August 18, 2013

"My goal is to be number one and I'll not enter competition if I'm not at 100 percent of my capabilities. I don't want to rush things."

Tamgho was operated on in Paris last month, a day after hearing a crack in his left leg landing a jump in training.

The Frenchman skipped the entire indoor season this year to concentrate on his preparations for the worlds in Moscow, having had to sit out competition for 20 months.

He had undergone surgery on the right ankle he fractured in July 2011 warming up for the European under-23 Championships and on a subsequent bone growth.

He claimed the world title in Moscow and achieved the third best performance of all time with 18.04 metres.

This latest setback means he will miss the world indoors in March in Sopot, Poland.