Japan's former world figure skating champions and Olympic medallists Mao Asada and Daisuke Takahashi booked tickets to the Sochi Olympics Monday, despite their disappointing performances at the national championships over the weekend. 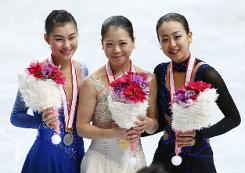 Asada, the 2008 and 2010 world women's champion who was second to South Korea's Kim Yu-Na at the Vancouver Olympics, botched her trademark triple axel attempt twice in the free skate to finish third overall behind Akiko Suzuki and Kanako Murakami at the Super Arena in Saitama, north of Tokyo.

The Japan Skating Federation decided later Monday to give the trio the three berths alloted to Japanese women in the Sochi figure skating competition.

"I feel totally disappointed today," said Asada, who will retire from competition after this Olympic season along with Kim, a fellow 23-year-old.

"I still have about one month to go. I will work harder still to perform my best," said Asada, who won the Grand Prix Final women's title after sweeping two events: Skate America and home event, the NHK Trophy.

Takahashi, 27, who took the Olympic men's bronze medal and the world title in 2010, finished fifth overalll in the men's competition on Sunday but the federation gave him one of the three tickets for Japanese men.

The other two men's tickets went to Hanyu and Machida, with Kozuka made a reserve skater in the team bound for Sochi.

According to criteria set in advance by the federation, the men's and women's national champions are given automatic qualification to Sochi.

The remaining places are worked out on the basis of factors including Grand Prix Final results, world rankings and personal best scores.

Takahashi finished fourth in the season-opening Grand Prix, Skate America, but won the NHK Trophy, while Kozuka had no trophy to show this season.

Japan will also send Narumi Takahashi and Ryuichi Kihara to the pairs event and Japanese American siblings Cathy Reed and Chris Reed to the ice dance in Sochi.

The same line-up of skaters will represent Japan at the world championships to be held at the same arena in March.