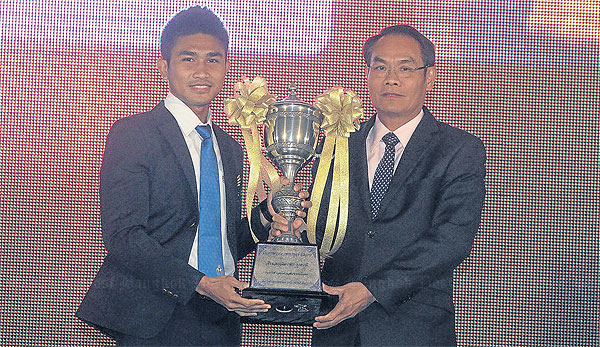 World No.3 Ratchanok, 18, became the world's youngest ever champion of the sport when she upset top-ranked and Olympic gold medallist Li Xuerui of China in the women's singles final at the world championships in Guangzhou in August.

Ratchanok is also the first Thai to have won a world title in badminton. The teenager, who won the world junior title three times in a row from 2009-11, was picked by an SAT panel ahead of Chanatip Sonkham (taekwondo) and Nootsara Tomkom (volleyball).

Ratchanok is apparently in the paid ranks as she plays on the professional circuit with prize money. She was also hired to play in the Chinese Super League.

Nootsara also plays for a professional club in Azerbaijan.

It was a bright year for Thai badminton as Ratchanok's coach Xie Zhuhua of China earned the best foreign coach award and the Badminton Association of Thailand was voted the best association.

Another shuttler Busanan Ongbamrungphan won the best youth athlete award in the female category while the male title went to weightlifter Theerasak Sripat.

Chatchai won the male athlete of the year award thanks to his performance at the 2013 World Amateur Boxing Championships in Kazakhstan where he was the only Thai to win a medal, a bronze.

The 28-year-old also won gold at this month's SEA Games in Myanmar.

Golfer Pornanong Phatlum took the professional athlete of the year award after winning the Dubai Ladies Masters, the season-ending event on the Ladies European Tour.

The 24-year-old also performed well on the LPGA Tour. She had two top-three results and finished the season in 23rd place on the money list with US$600,210. The Chaiyaphum native is currently 36th in the world.

The women's volleyball squad was the best team for winning the Asian title in Nakhon Ratchasima and Somporn Chaibangyang, president of the Volleyball Association of Thailand, claimed the sports administration award.

At yesterday's ceremony, the medal-winning athletes, coaches and associations at the SEA Games also received a total of 170 million baht in bonus from the National Sports Development Fund.

Separately, their coaches receive 20 percent of the athletes' bonuses and the associations 30 percent.

In all, the athletes earned 122 million baht. 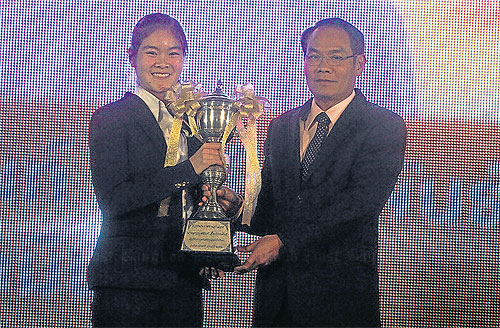 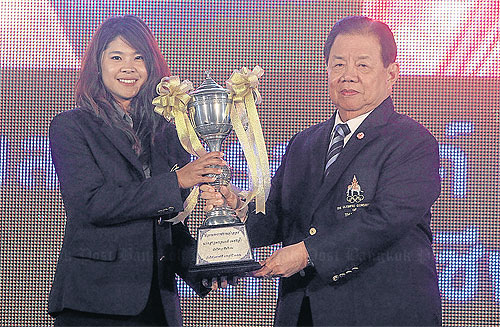