Ariya to return to action next month
Sports

Ariya to return to action next month

Ariya Jutanugarn plans to return to action at the Women's Australian Open next month. 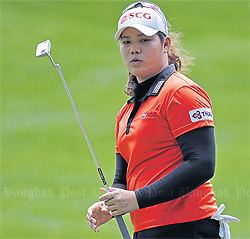 Having been sidelined due to a shoulder injury, the 18-year-old had her first practice round in seven months at Amata Spring Country Club yesterday.

Ariya said she felt very happy with her swing and physical fitness.

"I am very happy and excited to play golf for the first time in seven months," said the world No.29.

"It went well although I am not 100 percent fit. Hopefully, I am ready for the Women's Australian Open."

Ariya got injured during a practice round at the Wegmans LPGA Championship in June. At that time, she was ranked 15th in the world.

The US$1.2 million Women's Australian Open, co-sanctioned by the Ladies European Tour (LET) and the LPGA Tour, will take place at Royal Melbourne Golf Club from Feb 13-16.

Before the tournament, Ariya will take golf lessons with coach Andrew Park in the US.

An LET member, Ariya began her professional career last year. She got off to a fast start and almost became the first Thai to win on the LPGA Tour when she blew a two-shot lead at the final hole at the Honda LPGA Thailand.

She soon reached the top 15 in the world and is still the highest-ranked Thai at No.29.

Meanwhile, her older sister, Moriya, will leave for the US next week to join the LPGA Tour's season-opening Bahamas LPGA Classic from Jan 23-26.

She then will join Ariya at the Women's Australian Open and the Honda LPGA Thailand from Feb 20-23.

Moriya said she aimed to be the first Thai to win an LPGA event.

"I want to win at least one title this year," said Moriya, who won the points-based LPGA rookie of the year award.

Moriya's best result last year was joint fourth at the Women's Australian Open. She finished 47th on the money list with $293,158 in 24 tournaments.

Their mother Narumol Tiwattanasuk said that Ariya would focus on the LET and at the same time try to earn an LPGA Tour card.

"I hope she will perform well and get an LPGA Tour card," she said.