Ethiopian running legend Kenenisa Bekele already holds two world records, and now he says he is eyeing a third -- this time in the marathon. 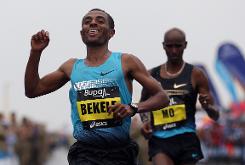 Ethiopia's Kenenisa Bekele wins the Great North Run half-marathon as he crosses the finish line ahead of Britain's Mo Farah, in South Shields, near Newcastle in northeast England, on September 15, 2013

Bekele will be the star draw of the April 6 Paris marathon, just a week before track rival Mo Farah of Great Britain makes his own marathon debut in London -- making for two back-to-back must-watch performances.

Both will be hoping to follow in the footsteps of Ethiopian "emperor" Haile Gebreselassie and others who have made a successful leap from the track to the roads, as well as show they can put up a stiff challenge to the seemingly unstoppable Kenyans.

"I want to run a world record in my first marathon," Bekele told AFP at his personal training camp set in the lush hills and thin air above Addis Ababa.

"My dream all the time is to run a fast time, you know, to be the best."

While the Paris marathon loop is not considered a potential world record course -- unlike Berlin, Chicago, Rotterdam or London -- all eyes will be on how close he can get to Kenyan Stanley Biwott's 2:05.11 course record set two years ago.

"If the marathon goes well, if I am feeling okay, I want to run the marathon again and again," he said, viewing the debut as the possible start of a journey that will end on the roads of Rio and Olympic glory in 2016.

Bekele already holds the world records for the 5,000m and 10,000m -- set in 2004 and 2005 respectively -- and few runners have even come within spitting distance of those times ever since.

His career was subsequently hurt by a lingering calf injury, but his victory at last year's Great North Run -- his debut half marathon -- signalled a return to form and provided a welcome return of his legendary, devastating kick.

Despite beating Farah in that race, Bekele has opted not to go head to head with him in the London marathon, choosing instead to race Paris -- still one of the top-tier marathons but a race where the pressure is likely to be far less intense.

Bekele said he is currently putting in around 240 kilometers (150 miles) of training per week in preparation, all at altitude.

"If I train well, if I prepare myself very well... I'm not worried about anybody. I will just concentrate on my race to be the best and run fast," he said, stressing that he was training as hard for the marathon as he has done in the past.

He's also hoping to secure the same legendary status of national hero Gebreselassie, arguably the greatest runner in history and who at 41 is still giving athletes 10 years his junior a run for their money.

"The only thing left for me is I have to achieve at the marathon. If I will achieve in the marathon, maybe you can compare me with anybody in Ethiopia with the best results ever," Bekele said.

The SET-listed energy company Banpu Plc says it has completed the acquisition of natural gas and midstream assets in a shale field in the US state of Texas from two subsidiaries of Exxon Mobil Corporation.

Dialogue between Myanmar’s military junta and ousted leader Aung San Suu Kyi to end the bloody crisis unleashed by the toppling of her government last year is “not impossible”, a junta spokesman has said.