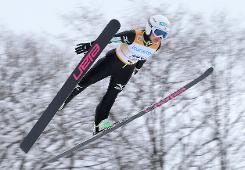 The 17-year-old jumped 104 metres (341 feet) to outdistance her rivals but fell after an erratic landing in the first round on the Zao hill in Japan.

She lost points for style because of the fall, but made up the marks with her distance.

After the second round was cancelled due to strong winds, she won the season's eighth World Cup event with 110.8 points from the first round.

"I am glad I've won the event. I regret that I could not land well," Takanashi said. "I still have a lot of work to do on my technique."

"I'm glad that I can stand on the podium with my senior teammate that I respect," said Takanashi, who will represent Japan along with Ito at the upcoming Sochi Games where women's ski jumping makes its Olympic debut.

The 19-year-old American, the champion of the inaugural women's World Cup season in 2011-2012, is recovering from a cruciate ligament injury after a fall in August.

She is hoping to compete again this month.

After eight events in the 19-round season, Takanashi leads the World Cup standings with a whopping 760 points, aiming for a second straight overall title.

Germany's Carina Vogt trails in second spot with 466 points, while Russian Irina Avvakumova is third with 435.

The Zao track has been renovated to resemble the ski jump at the Sochi Games. Its take-off ramp is more gradual than most other tracks at World Cup venues.

Results: (The second round was cancelled due to strong winds)

Overall standings (after eight of 19 events)

Messi and Lewandowski's World Cup dreams in the balance