Scottish Rugby Union chiefs are to install a new hybrid pitch at their Murrayfield headquarters for the start of next season after the once pristine pitch came under attack from parasites. 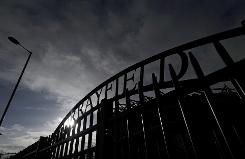 View of Murrayfield Stadium in Edinburgh on February 25, 2012

But the SRU's move -- which they said Tuesday was "the single biggest investment in the Edinburgh ground since the stadium was reconstructed in 1994 -- will be too late for Saturday's showpiece Calcutta Cup Six Nations clash against England.

The pitch was damaged by nematodes in the build-up to last year's November internationals and Scotland's ensuing matches against Japan, South Africa and Australia witnessed several worrying scenes.

Front-row forwards found the ground being churned up underneath them at scrums while, unusually, even open play saw players unable to keep their feet.

Various treatments were tried, the most publicised being spraying the pitch with garlic.

So concerned were the SRU by the situation they moved Edinburgh's club games to another ground but doubts remain as to how the pitch will cope with the rigours of international rugby when England visit on Saturday.

Now the SRU is to follow the example of their counterparts in England and Ireland by installing a Desso surface of the kind already in place at London's Twickenham and Dublin's Lansdowne Road.

They are said to have a much faster recovery rate than grass, allowing grounds to host more than 40 major fixtures a season.

"We are doing this primarily because this hybrid pitch is widely recognised as the best grass surface in the sporting world and we all want to see the Murrayfield playing surface restored to the pristine condition for which it is renowned," Scottish Rugby’s director of management services, Mark Laidlaw, said in a statement.

"This is an investment that will safeguard international rugby on Murrayfield’s hallowed pitch but will also enable us to be in the market seeking out major sporting events to bring to our stadium," McKay said.

Newlands in Cape Town, the Nelson Mandela Bay Stadium in Port Elizabeth and the Forsyth Barr Stadium in Dunedin have all had the Desso pitch installed, as has the Liberty Stadium in south Wales shared by the Ospreys rugby club and Swansea City football club.