The International Olympic Committee on Thursday said it was seeking clarification from Russia over the jailing of a leading activist who criticised the environmental damage caused by the Sochi Games. 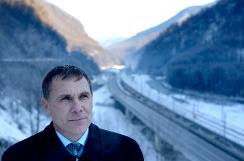 A picture taken on December 28, 2013, shows Environmental Watch ecology group activist Yevgeny Vitishko, standing in front of the new road between Adler and Krasnaya Polyana in the Black Sea resort of Sochi

A court on Wednesday ordered Yevgeny Vitishko, an activist with the group Environmental Watch on the North Caucasus (EWNC), to serve a three-year sentence in a penal colony.

IOC spokesman Mark Adams said the request for clarification had been made to the Russian authorities through the local organisers of the Sochi Games.

"In the case of Mr Vitishko, we have raised this case in the past" to the Sochi organisers, Adams said.

"Given the latest developments yesterday, we have asked Sochi for further clarification," he added, saying that the letter requesting further information had been sent on Thursday morning.

Vitishko was convicted in 2012 of damaging a fence during a protest against the construction of what the group believes is a mansion for the region's governor in a public forest.

Vitishko and the EWNC have been vehement critics of the damage to the environment from the construction of venues for the Sochi Games.

Human Rights Watch condemned Vitishko's sentence as punishment for his criticism of the Olympics, saying it was "retribution" for his activism.