Serena Williams waited out a 45-minute rain interruption Saturday before defeating France's Caroline Garcia 6-4, 4-6, 6-4 to advance at the ATP and WTA Miami Masters. 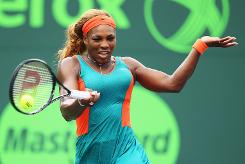 Serena Williams of the USA returns the ball against Caroline Garcia of France during their match at the Sony Open at Crandon Park Tennis Center on March 22, 2014 in Key Biscayne, Florida

The world number one's progress was temporarily halted in the fifth game of the final set when a passing shower stopped play.

But after the pause, top seed Williams emerged with her third career victory against her 74th-ranked rival to reach the fourth round at the hardcourt event.

Williams, 32, bidding for a record seventh title at her home tournament, now stands 63-7 at the venue.

"Granted she played great, but I made so many errors, I hit so short," said Williams. "It really isn't the same player. I just have to do better.

"It's important to stay positive. Obviously I wasn't at my best. I had 40-something errors.

"It's not the way to play professional tennis. On the professional tour you have to do a little better than that, so hopefully I can, in the next few matches, do better."

The third-seeded Swiss raced through an 18-minute opening set, winning the first seven games before eventualy losing the second set.

Wawrinka recovered on cue in the third with an opening break to advance in just under 90 minutes and then admitted he is still adjusting to his new status as a Grand Slam winner.

"I still have some ups and downs mentally. I was negative in the second set a little bit stupidly, but then I'm really happy with the way I started the third set," Wawrinka said.

"It was important to come back strong, to move well again, to play aggressive, to push him, and to get the break early (in the third set).

"I'm happy to win. That's the most important. It was the first one here. It's never easy. Conditions were really slow, really humid. You need to get through. That's it -- just win the matches."

Wawrinka fired eight aces and broke four times. He owns owns three wins without a loss against Gimeno-Traver after defeating the number 99 twice in 2013, both times on clay.

The Swiss, playing only his fourth ATP match since beating Rafael Nadal to capture his first major in Melbourne, improved to 14-1 on the season.

German Tommy Haas, a 2013 semi-finalist, was forced out before his first match with a recurring shoulder injury.

In women's play, 14th-seeded Wimbledon finalist Sabine Lisicki was unable to play due to influenza, handing a walkover to Belgian Kirsten Flipkens.