West Indies captain Darren Sammy smashed an unbeaten 34 off 13 balls to virtually knock Australia out of the World Twenty20 with a dramatic last-over win in Dhaka on Friday. 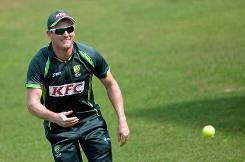 West Indies captain Darren Sammy plays a shot during the ICC World Twenty20 match between Australia and West Indies at the Sher-e-Bangla stadium in Dhaka on March 28, 2014

The West Indies, chasing Australia's challenging 178-8, appeared headed for defeat when they were 148-4 in 18 overs, still needing 31 runs from the last two overs.

But Sammy plundered 19 runs off paceman Mitchell Starc in the penultimate over and then hit two sixes in James Faulkner's final over to seal a six-wicket win with two balls to spare.

It was the second win in three games for the defending champions in group two of the Super-10s. Australia's second successive loss meant they may not qualify for the semi-finals even if they beat India and Bangladesh in their remaining games.

Sammy and Dwayne Bravo (27 not out) put on a match-winning stand of 49 in 19 deliveries after opener Chris Gayle had hammered 53 off 35 balls at the start.

Faulkner, who had annoyed the West Indies players before the match by saying he did not like them, was at the receiving end of barbs by Gayle and Sammy after the match.

"We were pumped up for this game," Sammy said. "It was really nice to see Faulkner bowling the last over. A lot of things were said before this match and you never wake up a sleeping lion."

Australian captain George Bailey said he had hoped for a bigger total by his team.

"I don't think we batted particularly well" he said. "We lost too many wickets in the middle. But the West Indies bowled really well. And Sammy stuck to his plans. He hit it nice and hard."

Gayle and Dwayne Smith put on 50 for the first wicket by the fifth over when Starc broke through by forcing Smith to edge a catch to wicket-keeper Brad Haddin.

Gayle, who began with four consecutive boundaries off Starc, was dropped by Haddin off Glenn Maxwell when he was on 26.

The left-hander hit six fours and two sixes when he fell in the 13th over, pulling 20-year-old leg-spinner James Muirhead to Maxwell on the deep mid-wicket fence.

Lendl Simmons and Marlon Samuels also fell in quick succession, but Sammy and Bravo counter-attacked to post a memorable win for the West Indies.

Earlier, Australia survived a spin assault to compile what appeared a commanding total after electing to take first strike.

Six of the eight wickets fell to spinners, with Samuel Badree, Samuels and Sunil Narine claiming two wickets each.

Maxwell hit 45 off 22 balls at the top of the order, while Brad Hodge chipped in with a 26-ball 35 during a sixth-wicket stand of 52 with Faulkner.

Maxwell propelled the innings with a stunning knock that contained three sixes and five boundaries before he was fifth out in the 12th over with the total at 100.