Chelsea's Premier League title challenge received a setback that could cost them dear as the leaders slumped to a shock 1-0 defeat at relegation-threatened Crystal Palace on Saturday. 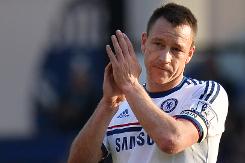 A second-half own goal by Chelsea captain John Terry settled the game, condemning Jose Mourinho's side to a second defeat in three games and leaving them at risk of being overtaken by both Liverpool and Manchester City.

City, who have three games in hand, could move above Chelsea on goal difference if they win at Arsenal later on Saturday, while Liverpool can climb above Mourinho's men by beating Tottenham Hotspur on Sunday.

Palace enjoyed the best of the first half at a sun-soaked Selhurst Park, with Yannick Bolasie hitting the side netting, and they took the lead in the 52nd minute when Terry headed Joel Ward's cross into his own net.

In response, Palace goalkeeper Julian Speroni had to save from Eden Hazard, but the hosts might have extended their lead minutes later when Jason Puncheon grazed the post from Cameron Jerome's pass.

Speroni then produced a stunning full-stretch save to deny Hazard for a second time, before Jerome squandered another opportunity to kill the visitors off with a shot that hit the outside of the post.

Palace continued to threaten, with Petr Cech saving from Puncheon and Stuart O'Keefe, but Fernando Torres spurned a glorious chance to equalise for Chelsea in the dying stages when he chipped over.

It was the second surprise loss in the space of a fortnight for Mourinho, whose side were beaten 1-0 at Aston Villa on March 15, and allowed Palace to pull five points clear of the relegation zone.

Earlier, Wayne Rooney inspired Manchester United to come from behind and beat Villa 4-1 in a game that witnessed a fresh protest against United manager David Moyes.

A small plane towing a banner that read 'WRONG ONE - MOYES OUT' flew over Old Trafford shortly after kick-off and the under-fire former Everton manager then saw his side fall behind to an Ashley Westwood free-kick.

However, Rooney scored twice before half-time, with Juan Mata and Javier Hernandez adding further goals as the under-performing champions provisionally moved to within nine points of the Premier League's top four.

Moyes had received a warm reception from the United fans prior to kick-off and he said: "Every supporter I bump into in the street or any dinner I go to, they're all talking about (how) they know exactly what it's like at Manchester United. And I've got to say, the crowd inside Old Trafford today showed that."

A breathtaking lob from wide on the right by Morgan Amalfitano put West Brom ahead in the second minute and Graham Dorrans added a second goal seven minutes later.

A 30-yard Jordon Mutch strike and a Steven Caulker header brought Cardiff level, only for Thievy Bifouma to restore West Brom's lead in the 94th minute, but Daehli smashed home an equaliser with the last kick of the game.

Swansea City eased their own relegation fears by winning 3-0 at home to Norwich City, thanks to a first-half Jonathan De Guzman brace and a second-half Wayne Routledge strike.