Ivory Coast international Salomon Kalou grabbed an injury time winner for Lille in Ligue 1 action on Sunday while his compatriot Max Gradel was the hero in Saint-Etienne's 2-1 derby win at arch rivals Lyon. 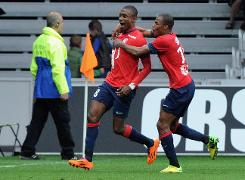 Lille's forward Salomon Kalou (L) celebrates after scoring a goal during a French L1 football match against Gingamp on March 30, 2014 at the "Pierre Mauroy" stadium in Villeneuve-d'Ascq, northern France

Lille had earlier tightened their grip on third place with a dramatic 1-0 over Guingamp when Kalou came off the bench to prod the ball home in the 92nd minute to snatch three desperately needed points for Rene Girard's side.

But in the weekend's final match, Gradel scored with 16 minutes left to keep Saint-Etienne three points behind Lille, and the final Champions League berth, with seven matches left.

In a tense Rhone derby at Lyon, Turkish international Mevlut Erding scrambled home a right wing cross in the 28th minute to put Saint-Etienne in front.

However Lyon responded 11 minutes later when Bafetimbi Gomis laid on a pinpoint cross from the wing which Alexandre Lacazette skillfully volleyed home to level the match at 1-1.

It was the 22-year-old Frenchman's 14th goal of the season, drawing him level with Paris Saint-Germain's Edinson Cavani as the second top scorer in Ligue 1 behind PSG's Swedish talisman Zlatan Ibrahimovic who rests on 25.

It was then down to Ivory Coast striker Gradel to steal the headlines, as the former Leicester City, Bournemouth and Leeds United player, plucked the winner with a quarter hour to play.

Earlier at Lille, the match appeared to be heading for a goalless draw before Kalou popped up inside the six yard box to knee the ball home following a corner from the right that led to a scramble.

"We came out of that one very, very well," said a delighted Girard.

"We're still in third so where is the problem? I think that many teams in France would like to be in third place even if we've struggled of late and have been missing efficiency," he added.

"We've got some complicated matches coming up so we'll just have to see. I was sorry to see some of the players whistled (by Lille fans) but we're not going to place too much importance on that. It was the public, it was not supporters." continued Girard.

In the only other match on Sunday, Rennes made it back-to-back league wins with a confident 3-0 home success against Bastia that moved them eight points clear of the drop zone.

It was the first time this season that the Brittany outfit had picked up three straight victories following their French Cup quarter-final success over Lille on Thursday.

They will now play second division Angers for a place in the Stade de France final against either Monaco or Guingamp.

"It's been a beautiful week, with three wins in three matches without conceding a goal," said Rennes coach Philippe Montanier.

"It boosts morale after the many difficult weeks.

"It's a week which has put us on the right track. We took another step towards staying in the top flight, and the perspective of a French Cup semi-final has spiced up our season."

Monaco suffered a surprise 1-0 defeat away to Evian on Saturday to leave PSG well on track for a second straight French title.

Laurent Blanc's PSG side warmed up for their Champions League showdown against Chelsea on Wednesday with a 1-0 win over Nice on Friday.

Elsewhere on Saturday, Odair Fortes scored to earn Reims a 1-1 draw at home to Lorient, after Vincent Aboubakar netted a first-half penalty, while there were goalless stalemates between Montpellier and Valenciennes and Nantes and Bordeaux.

Marseille scored in the dying minutes to salvage a 1-1 draw at relegation-threatened Sochaux while Ajaccio and Toulouse battled to a 2-2 draw in Corsica.