A solo strike from Javier Pastore right at the death clinched a 3-1 victory for Paris Saint-Germain in the first leg of their Champions League quarter-final against Chelsea on Wednesday. 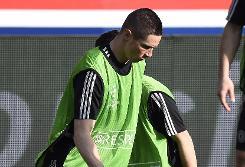 An early Ezequiel Lavezzi strike and a David Luiz own goal either side of an Eden Hazard penalty for Chelsea had looked set to give PSG just a narrow advantage ahead of next week's second leg at Stamford Bridge, but Pastore's effort leaves the French champions firmly in control of the tie.

It will also boost their confidence after the blow of seeing 40-goal top scorer Zlatan Ibrahimovic hobble off injured in the second half, and PSG coach Laurent Blanc admitted the late goal could be crucial.

"The third goal changes things, but what I will take from this game more than anything is that our second half was excellent," said Blanc, who also revealed that Ibrahimovic will undergo further tests on Thursday on what looked like a problem with his right thigh.

"We know the match at Stamford Bridge will be complicated, regardless of the result here," he added.

Meanwhile, Chelsea manager Jose Mourinho was left to rue the concession of the third goal, which he saw as especially sloppy.

"From a strategic point of view the team played with discipline and the most difficult things they did very well," he said.

Chelsea were without Samuel Eto'o due to injury, and yet Mourinho left Fernando Torres on the bench, with Andre Schuerrle preferred to the Spaniard in attack.

The home side were expected to control possession but few could have foreseen the extent to which they came flying out of the blocks.

Marco Verratti had the game's first shot on goal after just 17 seconds and the opening goal arrived inside four minutes, mixing delightful build-up play with some questionable defending.

Thiago Motta worked the ball out to Blaise Matuidi on the left, and the France midfielder's cross was met by the head of Chelsea captain John Terry.

However, he could only knock the ball down for Lavezzi, who controlled on his chest before firing into the net off the underside of the bar on the half-volley.

It was the Argentine's sixth goal in PSG's last 10 games and Chelsea looked in shock. Soon after Lavezzi was chopped down by Ramires and the Brazilian picked up a booking that rules him out of next week's return leg.

However, the visitors soon started to take the game by the scruff of the neck as they went in search of an equaliser, and they were gifted a penalty in the 27th minute when Oscar went down following an uncharacteristically rash challenge in the box by his compatriot Thiago Silva.

Hazard, who won the French title on the same ground with Lille three years ago, sent goalkeeper Salvatore Sirigu the wrong way from the resulting spot-kick.

Chelsea might even have taken the lead before the interval when Hazard connected first-time with a hanging Willian cross on the left-hand side of the area, but his volley struck the far post and rebounded to safety.

PSG had failed to make the most of their stunning start but they regrouped at the interval and almost seized the lead for the second time on 52 minutes, Lavezzi heading just over from another Matuidi left-wing cross.

And just after the hour mark they were back in front, Luiz conceding a foul wide on the left and then helping Lavezzi's wicked delivery, which had evaded 'keeper Petr Cech, into the net.

PSG's momentum was checked again midway through the second period when Ibrahimovic hurt himself playing a pass to Christophe Jallet in midfield and hobbled off clutching the back of his right thigh.

But the home fans' concern for the Swede's fitness was forgotten as Pastore, a late replacement for Lavezzi, wriggled away from the challenges of Cesar Azpilicueta and Frank Lampard before beating Cech at his near post.