Roma kept alive their slim hopes of wresting the Serie A title from Juventus with a 4-2 win over Parma in the capital on Tuesday. 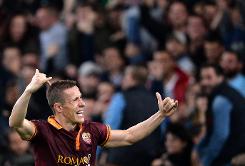 AS Roma's Brazilian midfielder Taddei celebrates after scoring against Parma during their Serie A football match in Rome's Olympic Stadium on April 2, 2014

The result left Roma eight points behind the champions with seven games remaining, although as Juve have dropped only 12 points in 31 matches so far, it would be a tall order to expect the Old Lady of Turin to falter from here.

But Roma did at least ensure that they need only one more point to secure one of Italy's three Champions League qualification positions for next season.

They also extended their lead over third-placed Napoli to nine points, leaving them in a great position to qualify directly for the continent's premier club competition's group stages.

Goals from Ivorian forward Gervinho and club legend Francesco Totti either side of Ghanaian Afriyie Acquah's strike gave the hosts a 2-1 half-time lead at the Stadio Olimpico.

Further goals from Bosnian playmaker Miralem Pjanic and Rodrigo Taddei made it comfortable for Roma before Jonathan Biabiany notched a last minute consolation for Parma.

The visitors' own Europa League hopes were hurt by the defeat -- their second in a matter of days in Rome having lost 3-2 to Lazio in Sunday -- which leaves them still in sixth, two points behind fifth-placed Inter Milan.