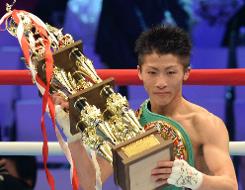 Inoue, who turns 21 on Thursday, remained the aggressor from the opening bell and floored the Mexican with a right straight to the face in the sixth round.

Canadian referee Mike Griffin gave the fight to the Japanese fighter by technical knockout at 2:54 into the round.

It was the sixth straight win for Inoue, the No. 4 WBC contender nicknamed "monster" by his home fans, since his professional debut in October 2012.

No Japanese boxer before him has won a world title through such a limited number of professional bouts.

Hernandez, 28, was defending his 48.9kg division title for the fifth time since he regained it by beating Thailand's Kompayak Porpramook in Toluca, Mexico, in October 2012.

It was his third loss against 29 wins, 18 of them by knockout, and one draw.

"I fought while I thought to myself that I was realising my childhood dream," Inoue said.

"I had to struggle midway through. It was the first time that I struggled since I turned pro and it was kind of fun as well. I want to fight on and aim for a bigger dream."

He kept putting pressure on Hernandez from the first round, throwing body blows to the Mexican after forcing him against the ropes.

But in the fifth round, Inoue was staggered by a close-range combination from the Mexican.

The knockdown came in an exchange of blows in the sixth round.

All three judges -- Americans Steve Morrow and Don Griffin and Guido Cavalleri of Italy -- scored 10 for Inoue and nine for Hernandez in each of the first five rounds.

"Inoue is a great champion," Hernandez said of his conqueror. "His left hook hurt me most.

"Inoue has great speed and he is good at dodging punches. If possible, I want to have a rematch with him," he added.