Roma striker Mattia Destro was handed a four-game ban by league officials on Tuesday, ending a dream weekend in which the Italy World Cup hopeful scored a hat-trick for the Giallorossi. 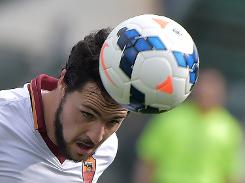 AS Roma's forward Mattia Destro heads the ball during the Italian Serie A match against Cagliari at the Stadio Sant'Elia Stadium in Cagliari on April 6, 2014

Destro claimed all three goals in Roma's 3-1 away to Cagliari on Sunday but fell victim to trial by television following a request by the disciplinary commission of the Italian Football Federation (FIGC).

As Destro tried to tackle Davide Astori from behind, his hand came up to catch the Cagliari defender in the face. Astori was booked for retaliating, but video evidence suggested Destro -- who escaped a caution -- was at fault.

A statement by Serie A officials affirmed Destro had been "caught by television" carrying out "an act of violence not seen by the referee" and would be "banned for three games".

The 23-year-old striker, who is hoping to be part of Cesare Prandelli's World Cup squad, was handed a separate one-game ban after being cautioned for simulation in the box three minutes before half-time.

That yellow card sparked an automatic one-game ban but Destro will now miss Roma's next four league encounters, at home to Atalanta, away to Fiorentina, at home to Milan and away to Catania.

He will only return in time for the visit of Juventus on May 9, a match which -- with Roma eight points adrift in second place -- is currently being spoken of as a potential title-decider.

Roma will also be without attacking midfielders Alessandro Florenzi and Miralem Pjanic for the visit of Atalanta after both were handed one-match bans due to the accumulation of yellow cards having been booked in Sardinia.

"Roma have announced they will appeal, which will be heard according to all such procedures of sporting justice," said Abete.

It is the second time Roma, who last won the title in 2001, have faced trial by television recently.

Roma general director Mauro Baldissoni said he believes the club are being treated unfairly at a crucial part of the season.

"We are shocked and worried about the direction the sporting justice body is going in at this stage of the season," Baldissoni told Roma's official television station.

"We've already talked about the De Rossi incident in the Roma v Inter match, another occasion in which video replays were used to punish one of our players.

"The referee assessed the situation and decided to punish the Cagliari defender by awarding Roma a free-kick.

"However, we now find ourselves punished by slow motion replays again, in an impartial manner, after someone has been brought in to rule on the incident.

"We just don't know what the rules are now. There were other incidents the same day that could have been interpreted differently by the referee, but were not."

Florida offers to host Olympics if Tokyo backs out