Dutch rider Wouter Poels of the Omega Pharma-QuickStep team won the fourth stage of the Tour of the Basque Country on Thursday as Alberto Contador maintained his overall lead. 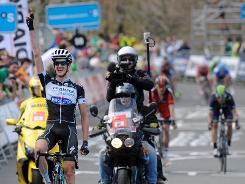 Team Omega Pharma's Dutch cyclist Wouter Poels celebrates after winning the fourth stage of the Tour of the Basque Country, a 151 km ride from Vitoria to Eibar, on the Arrate mount in Eibar on April 10, 2014

However, Spanish star Contador, of the Tinkoff-Saxo team, saw his compatriot Alejandro Valverde shave two seconds off his race lead, which now stands at 12 seconds.

Poels won the 151-kilometre ride from Vitoria to Eibar after making a late attack on the final climb, the 26-year-old beating Movistar rider Valverde and another Spaniard, Samuel Sanchez of BMC, by one second.

Contador attacked several times himself on the final climb but was unable to break clear of Valverde, keeping the general classification wide open with two stages remaining.

However, Poland's Michal Kwiatkowski lost seven seconds on Contador and in the process gave up his third place in the overall standings to Italy's Damiano Cunego.

Friday's penultimate stage will be a 160km ride to Xemein before the event concludes with an individual time trial on Saturday.

The Commerce Ministry’s Internal Trade Department is scheduled to post the prices of 300 medical services on the department’s website later this month so consumers can view them before deciding to receive the services.