Manny Pacquiao and Timothy Bradley go into their welterweight world title rematch on Saturday in Las Vegas aiming to lay the ghost of their polarizing first contest. 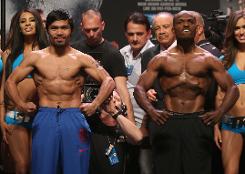 Manny Pacquiao and Timothy Bradley flex their muscles during a weigh-in prior to their welterweight world title bout in Las Vegas on April 11, 2014

"I've got to knock him out, that's what I have to do," Bradley said Friday at a raucous weigh-in on a stage at the MGM Grand Garden Arena.

California's "Desert Storm" Bradley seized the World Boxing Organization belt from the Philippine icon with a narrow split decision that many believed the American didn't deserve in June 2012.

Although Pacquiao took the defeat in stride, he suffered a brutal knockout loss to Juan Manuel Marquez in his next fight, and is out to prove his subsequent lopsided decision over Brandon Rios marked the start of another illustrious chapter in his storied career.

Conversely, another defeat to Bradley would see fresh calls for the 35-year-old Pacquiao to quit the sport.

He struck a pose on the scales as Philippine flags waved, while Bradley feigned shock at being greeted with boos on homesoil.

The usual stare-down had a good-natured feel, and Pacquiao exited the stage with a blown kiss for his fans.

Bradley, who has twice defended the title he snatched from Pacquiao, tipped the scale at 145.5 pounds.

Pacquiao, a congressman beloved in his homeland, brings a record of 55-5 with two drawn and 38 knockouts to the bout.

Bradley boasts a record of 31-0 with 12 knockouts, but despite his unbeaten status and champion's belt, he has taken second billing to Pacquiao in this showdown.

Both men will make $6 million (4.3 million euros) from the fight, according to official documents filed with the Nevada State Athletic Commission, but charismatic promoter Bob Arum said Pacquiao is guaranteed $20 million once all the revenues are totted up.

Bradley, 30, says he doesn't care. He knows Pacquiao is the bigger draw, but he says "Pacman" is on the down slope of a professional career that stretches back to 1995.

"I think he may lack fire," the dogged American said. "His motivation is not there. He's been at the top for a very long time. He has over 60 fights in the ring with all the best. Maybe this is one fight too late for him."

That kind of talk has only strengthened Pacquiao's resolve, according to trainer Freddie Roach, who nevertheless knows that Bradley can't be taken lightly.

"Bradley is a better fighter than some people give him credit for, and we know he has a lot of heart," Roach said. "That doesn't change the fact that Manny has a plan that will beat him again -- this time for real."

The American followed up his win over Pacquiao with his best year, out-pointing Ruslan Provodnikov in a 12-round slugfest then gaining a decision over Marquez.

Bradley displayed solid tactical skills against Marquez, but Roach thinks that once he tastes Pacquiao's power he'll revert to the undisciplined street style that let him in for such punishment against Provodnikov.

"It's part of his nature," Roach said. "Once you hit Bradley, he'll fight back."

Bradley says he's prepared, no matter how the fight evolves.

"I've got so many dimensions," Bradley said. "I may fight with him, I may outbox him."

But Roach thinks Bradley was left vulnerable after suffering a concussion in the bruising encounter with Provodnikov -- and the memory of that tear-up might make him think twice on Saturday.

"Hopefully, when Manny starts throwing combinations, he'll be reminded of that," Roach said.