Cricket stars Sachin Tendulkar and Sourav Ganguly and leading Spanish club Atletico Madrid are among the owners of teams in a new India football league set to start this year, organisers said Sunday. 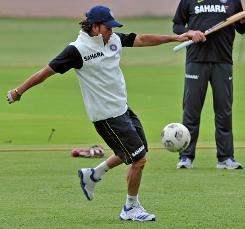 The Indian Super League, featuring foreign and Indian talent in teams based in eight cities, is due to start nationwide in mid-September and run until the end of November.

Organised by the All India Football Federation, the league is being backed by India's Reliance Industries, which is controlled by the country's richest man Mukesh Ambani, and by sports management giant IMG.

Former international stars such as Thierry Henry, Robert Pires, Hernan Crespo, Fredrik Ljungberg, Dwight Yorke and Louis Saha are among those who have reportedly signed up to play in the league.

Tendulkar, who retired last year as the world's leading batsman in both Test and one-day cricket, has joined hands with Hyderabad-based investor Prasad Potluri to co-own the Kochi city franchise.

"I will always remain a sportsman at heart who is keen to positively impact the sporting fabric of the nation," Tendulkar said in a statement.

"The Indian Super League presents a great opportunity to develop a platform for youngsters to learn and enhance their talent to develop into outstanding players."

Ganguly, a former India Test captain, will team up with La Liga leaders Atletico and three Indian businessmen to co-own the team of his home city of Kolkata, an All India Football Federation statement said.

Other team heads include Bollywood stars Salman Khan (Pune franchise), Ranbir Kapoor (Mumbai) and John Abraham (Guwahati), the statement said without elaborating on the financial obligations for each owner.

"The management takes great pride in announcing the winning bids as a good mix of corporates and celebrities," it said.

The made-for-television event, to be broadcast by the Rupert Murdoch-owned Star TV network, has already run into fierce opposition from India's top clubs.

The clubs have yet to confirm they will release players for the tournament, which they said earlier would threaten their existence and ruin the existing national I-League domestic competition.

India, ranked a lowly 145th in the world and 25th in Asia, has seen a surge in football's popularity due to live television coverage of matches played around the globe.