No World Cup for Totti and fellow veterans - Prandelli
Sports

No World Cup for Totti and fellow veterans - Prandelli

Italy coach Cesare Prandelli on Tuesday ruled veterans Francesco Totti, Luca Toni and Antonio Di Natale out of his World Cup squad for Brazil as he backed Giuseppe Rossi and a clutch of emerging younger players. 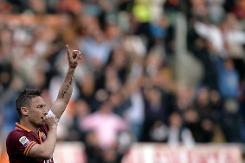 AS Roma's Italian forward Francesco Totti celebrates after scoring against Parma during the Italian Serie A football match AS Roma vs Parma at Rome's Stadio Olimpico on April 2, 2014

Totti and Toni had notably harboured hopes of travelling to Brazil for what would have been a last World Cup hurrah -- Toni's dreams boosted by his 17-goal tally so far in Serie A this season.

However Roma captain Totti, Verona striker Toni and Udinese forward Di Natale were all ruled out by Prandelli after the coach assembled a group of 42 players from which he will select his final 23-man squad.

"I have a huge amount of respect for these players, and they deserve a much fuller explanation than they're going to get here," said Prandelli.

"But they will only be called up in case of emergencies."

Rossi, who was leading the league scoring charts before suffering a knee ligament injury in early January, from which he is still recovering, has always had the backing of the 56-year-old coach, who appeared to leave the door open to the Fiorentina striker.

However, Prandelli said Rossi's World Cup future could depend entirely on the outcome of scheduled fitness tests.

"On Rossi I can't say anything. The tests he undergoes must be analysed and then compared with the old data we have on him," added Prandelli.

"I don't want to put any pressure on him. He needs peace to recover."

Rossi is expected to make the trip to Brazil alongside number one forward pick Mario Balotelli.

But younger, emerging talents like Mattia Destro of Roma and Torino's Ciro Immobile, who tops Serie A scoring on 19 goals -- one more than Carlos Tevez -- are also in the reckoning.

"There's no truth to the suggestion that they both can't be in Brazil."

The Azzurri coach, meanwhile, sent a clear message to the players whose bad attitude, he says, does not belong in this summer's showpiece.

"This morning I met with the players and I reminded them that the league's code of ethics will count.

"Even in the last month of the season, whoever slips up stays at home because it means he won't be able to handle the pressure of the World Cup.

"I'm sick of seeing certain attitudes. National team players must be strong enough not to allow themselves to react to provocation."