No Brazil move for Anelka -- Mineiro 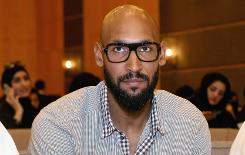 Club director of football Eduardo Maluf indicated Mineiro had been unable to contact the former Arsenal, Real Madrid, Paris Saint Germain and Chelsea veteran and would not pursue their interest in the 35-year-old.

"At no time did we manage to speak to the player," Brazilian media quoted Maluf as saying.

Mineiro, current club of veteran Brazil star Ronaldinho, confirmed to AFP the deal was off.

Maluf said the club would be making a complaint to FIFA, claiming they had earlier agreed a deal with former France international Anelka's representatives.

Maluf said "we had everything agreed" but had received information from Anelka's agent Cristian Cazini that he could not arrive before Saturday.

"We decided the contract was cancelled -- we are not going to wait until the 19th," said Maluf.

Mineiro chairman Alexandre Kalil had said on April 5 via Twitter that Anelka would be signing and Brazilian media showed pictures of fans bearing "welcome Anelka" banners.

The club had expected to unveil the controversial Frenchman last week but went quiet on the deal after he failed to show, instead traveling to Kuwait to participate in a Muslim youth meeting.

Maluf indicated that a pre-contract had been inked for Anelka to play for the club until December next year.

West Bromwich Albion sacked Anelka last month "for gross misconduct" after he made an alleged anti-semitic "quenelle" gesture on scoring a goal.

Anelka denied the allegation, insisting the salute was to show solidarity with his friend, controversial French comedian Dieudonne M'Bala M'Bala.

Anelka burst onto the scene with Arsenal as a teenager before moving to a succession of clubs.

He won 69 French caps, scoring 14 goals before being thrown out of the 2010 World Cup following a row with then coach Raymond Domenech.

He was eventually handed an 18-match ban, effectively ending his international career.