Brazilian star Neymar could miss the rest of the club season after being ruled out for four weeks with an injured left foot, dealing Barcelona a worrying blow to their La Liga hopes. 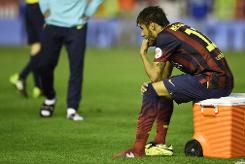 The club confirmed on Thursday that the 22-year-old picked up the injury in Barca's 2-1 defeat to Real Madrid in the Copa del Rey final on Wednesday.

He will now miss La Liga games against Athletic Bilbao, Villarreal and Getafe.

However he has an outside chance of facing Atletico Madrid in what could be a title decider on the last day of the season.

The news will also be a concern for Brazil boss Luiz Felipe Scolari with Neymar set to lead his country's hopes for a sixth World Cup title on home soil in June.

There was further bad news on the injury front for Barca as Spanish international Jordi Alba will also be out for at least three weeks due to a hamstring injury.