Torino striker Ciro Immobile enhanced his claim for a place in Italy's World Cup squad with his 20th goal of the season on Saturday. 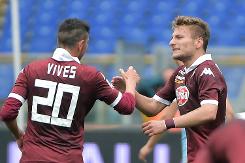 Torino's midfielder Giuseppe Vives congratulates Ciro Immobile (R) after his goal during an Italian Serie A football match against Lazio on April 19, 2014 at the Olympic stadium in Rome

Torino's local rivals, league leaders Juventus, play later when they take on relegation-threatened Bologna, aiming to consolidate their eight-point advantage over Roma, who are in action earlier at Fiorentina.

But their hold on the last Champions League is not under threat, despite Inter Milan's 2-0 away win over Parma.