Americans Jim Furyk and Ben Martin matched South Korea's K.J. Choi for the lead on Saturday after the conclusion of the storm-halted second round of the $5.8 million US PGA Heritage tournament. 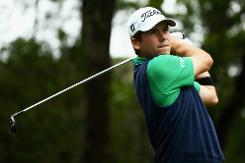 Furyk, the 2003 US Open champion, and Martin, whose career-best PGA finish of third came earlier this year at Puerto Rico, were among 65 players forced to finish their second rounds on Saturday after heavy rain halted play Friday afternoon.

They joined Choi, who was able to finish his round on Friday, on five-under par 137 after 36 holes with the third round set to begin later Saturday afternoon at Harbour Town.

Choi has won five times when at least sharing the lead at the midway mark and is seeking his ninth PGA title, his most recent coming at the 2011 Players Championship.

Furyk, the 2010 Heritage champion, completed a five-under 66 round Saturday while Martin, who has never led so late in a PGA event, shot 68.

A pack of 11 players, including England's Luke Donald and Matt Kuchar, who finished fifth equal last weekend at the Masters, shares fourth on 139.

Kuchar is the highest-ranked player in the field at sixth in the world.

Donald missed the cut last week in the first major tournament of the year at Augusta National.

Among those on 140 were major winners Geoff Ogilvy of Australia, Charl Schwartzel of South Africa, Graeme McDowell of Northern Ireland and Martin Kaymer of Germany.