Five things England must do in future
World

Five things England must do in future

England have appointed a new head coach in Peter Moores, but that in a sense was the easy part for the England and Wales Cricket Board as they look to get the team back on an even keel after a 5-0 Ashes hammering in Australia. 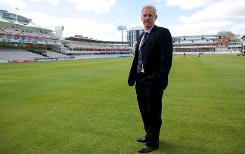 Newly appointed head coach of the England cricket team Peter Moores poses for a picture at Lords cricket ground in London on April 19, 2014

It is too much to expect Moores, back in the national hotseat after a two-year stint in charge that ended when he was sacked in 2009, with the now exiled Kevin Pietersen stripped of the captaincy, to be a panacea for England's ills.

But below AFP Sport looks at the five key areas the England must address if they are to return to winning ways.

1. Runs on the board

England simply haven't scored enough runs in recent times -- you have to go back to the end of March 2013 to find the last time they posted the benchmark figure of 400 in a Test innings.

The bowlers managed to cover up the deficiency during last year's home Ashes win over Australia but no side, however talented the attack, can achieve sustained success on such a meagre diet of runs as was proved during the debacle 'Down Under'.

And with Pietersen exiled and Jonathan Trott currently unavailable due to a recurrence of his stress-related illness, there are chances for county batsmen to force their way in during the upcoming home series with Sri Lanka and India.

2. The need for speed

Test history shows that when all other things are equal, and even sometimes when they aren't, the team with the better fast bowlers wins.

That was certainly the case during the Ashes where the return to form of out-and-out paceman Mitchell Johnson gave a whole new edge to an attack already featuring two admirable seamers in Ryan Harris and Peter Siddle.

England had lanky quicks Steven Finn, Boyd Rankin and Chris Tremlett in their squad but they all failed to fire.

Finn, subject to conflicting advice about whether he should bowl off a long or short run, didn't play a single Test on tour but at the age of 25 there is still time for the Middlesex bowler, who has already played 23 Tests, to come again.

Meanwhile Sussex's Chris Jordan, capped at one-day international level but yet to make a Test debut, is capable of searing pace.

The retirement during the Ashes of off-spinner Graeme Swann saw England lose one of the mainstays of their recent success. Swann took useful wickets and also allowed England to field a four-man attack in which three seamers were often able to get through an innings without an excessive workload due to the spinner's control.

Now England must decide whether left-armer Monty Panesar should replace Swann or whether they need to look elsewhere. All bowlers thrive on confidence and support but Panesar needs to 'feel the love' more than most -- a point England need to keep in mind should they decide Monty's their man.

Even when they were winning, several England cricketers gave the impression that playing international sport was about as much fun as attending an open-air funeral in pouring rain. Too many people within the England set-up have confused solemnity with seriousness of intent and a change in mood would not only be welcomed by the team's fans, it might help the players relax as well.

Alastair Cook, like many an England captain before him, is at his best when leading from the front and Moores, as much as anyone else, would be delighted to see the opener back in the runs this season.

However, with what is set to be a new-look team, now is the time for Cook, whom England have backed to the extent of ditching Pietersen for his supposed lack of support for the Essex left-hander, to make the job his own and be more pro-active in the field.

Osaka returns to French Open with questions over form, fitness